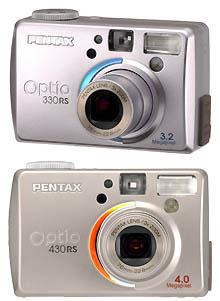 The two models feature a simple designing around the lens by eliminating the unattractive concavity and convexity near the lens, a big alteration to the designs of the previous models, Optio 430 and 330.

In making a user-friendly improvements, the company altered the location of the new camera’s playback-mode button by putting it in the center of a cross key at the back. The previous model has it on a dial in the top of the body.

Among new functional features are the 3D picture function, the resizing function to reduce the size and the quality of a recorded image, and the digital filter function that brings the effect of taking pictures through a color filter.

The cameras have a Type I-CF memory card and a separate internal memory capable of storing data of up to about 11MB.

Both cameras can shoot movies up to 30 seconds in length at 15 frames per second with a resolution of 320 x 240 pixels, by using a 1/1.8 inch CCD. They can also shoot still images by a magnification of up to 6x through the combination of a 3x optical zoom lens and 2x digital zoom lens.

Image data is stored in the formats of JPEG for stills and AVI for videos. The cameras have a 1.6-inch TFT-LCD and an automatic strobe for taming the red-eye effect.

The cameras measure 92mm x 59mm x 32mm, and weigh 235g (including a rechargeable lithium-ion battery and a CF card). They have USB and video ports as interfaces.