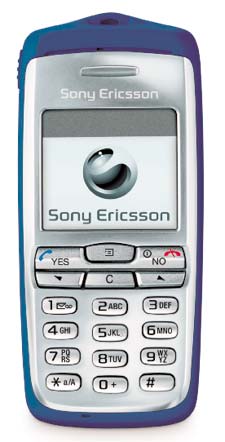 Sony Ericsson today unveiled the T600 mobile phone. This GSM triple band mini mobile has text messaging with pictures and sounds (EMS), an easy-to-use calendar, access to online services (WAP), and an extensive phone book. The T600 will be one of the smallest and lightest phones when it comes out on the market in Q3 2002.

The T600 was unveiled in Singapore and close to 30 other locations around the world in connection with the CommunicAsia 2002 Summit. As Sony Ericsson now adds a powerful range of products to its portfolio, the T600 brings a small phone with great looks and messaging capabilities to the table. Within the phone, there is a gallery of expressive pictures in various themes and it is easy to include a picture in a text message. It is also possible to add sounds to a message, such as claps or chimes, or compose a ring melody and send as a sound attachment. To do this, the phone uses EMS, which is also implemented by other major handset vendors.

For gaming, the T600 features entertaining games, some of them giving the gamer physical feedback with vibrations. As the T600 is a triple band phone, it can be used across five continents, making it the ideal phone for the frequent traveler.

Weighing less than 60 grams, the T600 still has 1.5 – 5 hours of talk time and 80-180 hours of stand-by time. The T600 comes in three colors, Moonlight Silver, Marine Blue and Sand Gold (available in some markets only). For further personalization and wearability, the T600 has a loophole where a wriststrap or mascot can be attached.

The T600 is also available for Chinese speaking markets, as the T602, supporting Chinese text input when sending SMS or registering names in the phonebook. The T602 has Lunar calendar as an extra feature.

Sony Ericsson Mobile Communications AB offers mobile communications products for people who appreciate the possibilities of powerful technology. Established in 2001 by Telefonaktiebolaget LM Ericsson and Sony Corporation, the joint venture continues to build on the success of its two innovative parent companies. Sony Ericsson creates value for its operator customers by bringing new ways of using multimedia communications while mobile. The company’s management is based in London, and has 4,000 employees across the globe working on research, development, design, sales, marketing, distribution and support.