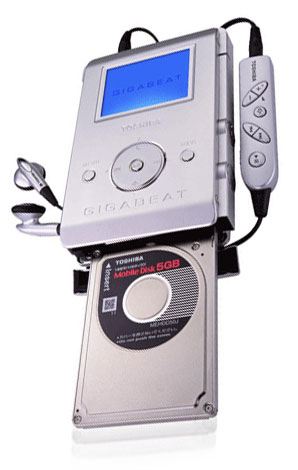 “Toshiba Corp. has chosen a removable hard drive for their new portable music player, which means a physically larger player but one with a much greater capacity for your favorite music.

The Gigabeat will playback music stored in the MP3, WMA or WAV digital audio file formats and Toshiba says the bundled 5GB hard disk offers enough space for around 1,000 MP3 files of 5 minutes length recorded at 128Kbps (bits per second). That’s 20 or 40 times the capacity of current memory cards.

The hard disk drives are 1.8-inch models developed by Toshiba. They are encased in PC Cards and so can also be used with most notebook PCs or other devices with PC Card slots. Of course, using Apple’s iPod, simply connecting the player to your Mac via the FireWire cable mounts the drive on your desktop.

With all this data storage space, transferring files to the player could take some time and here Toshiba has implemented the new USB2.0 interface, which can transfer data at 480M bps — a much higher speed than the 12M bps supported by USB1.1, which is found on most digital music players today. Using the bundled application software, Toshiba says an entire CD worth of audio can be transferred to the device in 30 seconds.

With its rectangular shape, liquid crystal display and circular control panel, the Gigabeat bears a passing resemblance to Apple Inc.’s iPod, which has a fixed 1.8-inch hard disk drive (produced by Toshiba) buried inside. Apple’s current model of the iPod contains a 10GB disk, allowing for approximately 2,000 songs.

Partly because of the hard disk slot and ejection mechanism, the Toshiba player is slightly larger but not by much. It measures 7.2 centimeters (cm) by 2.2 cm by 11.2 cm, which puts it around 1 cm wider and taller than the iPod. At 180 grams with no disk and 235 grams with the drive inserted, it also weighs more than the Apple player, which is 185 grams including its internal hard disk.

Other features include an on-screen menu in English, Japanese, French, Spanish or German. The screen has 160 x 120 pixel resolution and is slightly smaller than the iPod’s 2-inch screen.

Toshiba said it has plans to put the Gigabeat on sale in the U.S. and then Europe although the company has not decided on a schedule for an overseas launch. “