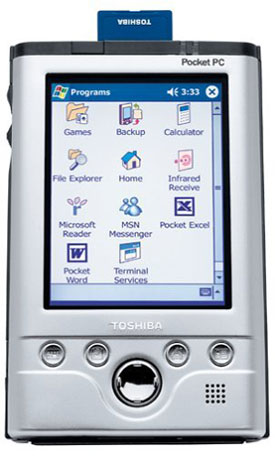 As the world leader in mobile computing, Toshiba’s wireless-enabled Pocket PCs provide Canadians with more options to work when and where they want. Integrated wireless communications enable the e740 Pocket PC to access network files and Internet resources without a cable connection while allowing the CompactFlash and SD expansion slots to be used for other options.

Toshiba’s e740 Pocket PCs can connect wirelessly with Toshiba notebooks, which began incorporating integrated 802.11b and Bluetooth antennae in October 2001, making them ideal complements to primary computers. The launch of this new productivity tool is timely with the corporate handheld computer market expected to grow by 31 per cent in 2002 to $154.4 million, (from $118.2 million in 2001) according to IDC Canada.

Weighing a mere 185 grams, the e740 Pocket PC is one of the thinnest and lightest handheld computers to boast this degree of memory and functionality with dual slots. The CompactFlash II and SD expansion slots enhance wireless productivity further by allowing users to access files from a wireless local area network (WLAN) through the e740 Pocket PCs 802.11b antenna and then project the presentation through a Bluetooth™-enabled projector with the appropriate card.

Users also can take advantage of the optional Toshiba Expansion Pack, which attaches to the bottom of the e740 Pocket PC allowing customers to conduct presentations via a monitor or projector with the integrated RGB port. The Toshiba Expansion Pack weighs only 33g and also integrates a USB port to connect to devices such as a full-size keyboard.

Also available is the optional Toshiba Pocket PC High Capacity Battery Pack that slides onto the back of the Pocket PC e740, tripling the unit’s battery life. Both the high-capacity battery and Toshiba Expansion Pack can remain connected to the Pocket PC e740 while the device is in the cradle.