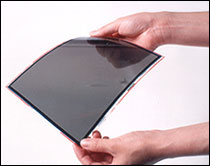 Toshiba Corporation today announced that it has developed the world’s first large flexible liquid crystal display, opening the way to the display of images on curved screens and moving toward the long-term goal of foldable LCDs. The new display is a full color, 8.4-inch super-slim low-temperature polysilicon active-matrix TFT LCD supporting SVGA resolution.

Toshiba leads the industry in low-temperature polysilicon technology and the latest announcement adds to the versatility of displays already known for superior brightness and fast refresh rates. The flexible LCD brings new potentialities to design, while its super-slim profile–less than 0.4mm–achieves a weight under 20g – a quarter to a fifth that of present low temperature polysilicon TFT LCDs. The flexibility of the screen also increases its resistance to shock.

Toshiba realized the flexible display by developing technology to achieve an extremely thin glass substrate, the layer on which TFTs are formed and attaching it to a flexible sheet. Displays using this technology can be manufactured at the normal process temperature. The new display can be flexed in all directions and bent to form a curve with a radius of curvature (R) as high as 20 cm. Other approaches to a flexible LCD have followed the approach of forming transistors on a flexible plastic substrate at an extremely low temperature, which did not achieve sufficient transistor quality or reliability.

Applications for the new display will include TVs with curved screens that can be mounted in publics and information displays in trains or buses. Toshiba is now developing mass production technology for the display and Toshiba Matsushita Display Technology Corporation expects to launch commercial products after fiscal year 2004.