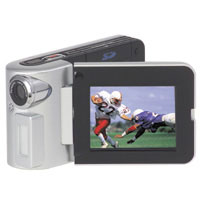 Given the pace in new tech that we see every day, getting something surpising is a bit rare. Thankfully, the folks at Panasonic provided me with a pleasent surprise with the new e-Wear SV-AV10. Half the size of my wallet, the SV-AV10 packs a digital comcorder, voice recorder, digital camera, and MP3 player into one very sleek silver package.

Fresh out of the box this baby is an impressive snapshot of how far portable tech has come. At a an incredible 1.97″ x 1.1″ x 3.43″ and a mere 3.46 ounces, this is about as portable as it gets. Obviously, this kind of size limits the buttons you can put on it. The SV-AV10 uses 3 buttons and a jog dial to cover all functions. Menu’s are displayed on a full two inch active-matrix LCD that flips out and swivels from the side of the device. It comes with a 64MB SD card for storage and includes the accompanying USB drive to swap files with your PC.

Although the camcorder portion is the main selling feauture, I’ll tell you right up front that the MPEG-4 video quality is nothing to write home about. The mono sound is decent, but the video clips are always slightly choppy. Of course, the SV-AV10 was never intended to replace a full camcorder. This unit’s real advantage lies in it’s amazing portability and ease of use. Over the last week I’ve carried it in my pocket non stop and have been amazed at how many times I’ve used it. There’s video of my son, my dog, a neighbourhood fire, a beach volleyball tournament and piles of other items that simply caught my eye. The 64 MB SD card will let you pack about 30 minutes worth of video anywhere you go. At the heavy compression rate, the file sizes are small so you can bet that there has been a non stop stream of baby updates being e-mailed out to anyone foolish enough to ask. On actual testing, the unit went 56 minutes non stop on a single charge.

Popping around it’s other functions, I had a go at the MP3 player. The player software functionned as it should however you may want to fork up some cash for a card with bigger storgage. Panasonic kicks in some decent media management software however veterans will likely opt to go with thier own. Add in the decent ear buds (included) and the unit delivers. The voice recorder works just as it should and allows it to replace yet another device.

In the great order of things, the unit’s least succesfull feature is the digital camera. Although functional for very basic e-mail photo’s, the units the 320×240 CMOS sensor just isn’t cut out for a quality JPEG. Unlike other low res cameras though, this one includes a flash which at least allows you to take bright pictures indoors.

At $399.99 US, it sure isn’t cheap but if you have the cash handy, this puppy is one helluva eye grabber. Despite not being the top quality product in any of it’s 4 categories, people were stopped dead in thier tracks nearly every time I used it because how cool it looks. That alone brings this pricey gadget to the 7 out of 10 on our satisfaction scale.