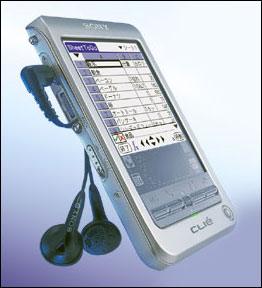 A new model has been introduced to Sony’s CLIE PEG-T600 series, the PEG-T650C. Main features of the new model include MP3 and ATRAC3 audio playback, as well as a 66 MHz processor.

Sony is keen on bringing new CLIE models to market should no longer come as a surprise to anyone; now the company is at it again, introducing the so far most advanced model in its PEG-T600 series. The new PEG-T650C adds MP3 and ATRAC3 audio playback capabilities along with a 66 MHz Dragonball VZ processor, where previous models in the series have only had 33 MHz processors and no audio playback capabilities.

To be available in Japan on June 8, the PEG-T650C comes with a 16-bit 320 x 320 pixel resolution display that makes use of the screen technology first introduced in the CLIE PEG-NR70 series, which is superior in terms of display quality to that found in previous CLIE handhelds. There is however no Virtual Graffiti area as in the NR70 series, but rather the conventional silkscreen found in previous PEG-T600C series models.

Equipped with 16 MB RAM and a 66 MHz Dragonball VZ processor, the PEG-T650C is rivaled only by Sony’s own NR70 series in terms of hardware specifications. As with all other CLIE handhelds it comes with a Memory Stick expansion slot, and similar to previous models in the PEG-T600 series it also comes with an enhanced infrared port, allowing it to act as a remote control for various Audio/Video equipment through software that’s bundled with the device.