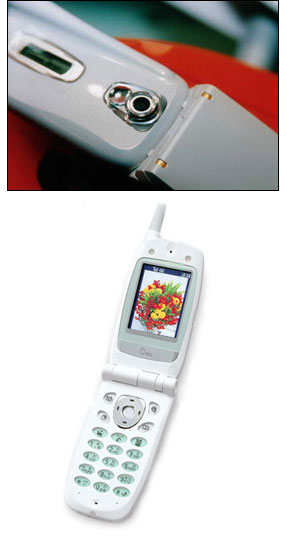 KDDI Corp.’s mobile phone service, au, is showing off a new phone handset that sports both a built-in camera and a receiver for global positioning system (GPS) signals at the Business Show 2002 Tokyo event, which is being held this week at the Tokyo Big Sight exhibition center.

The new phone, the model A3012CA, allows users to take a still photo and then send it — along with a map of the place the picture was taken — to other people via email. The A3012CA is a new type of high value-added handset that basically combines photo-taking and sending fonctions with GPS technology that enables the location of the phone to be pinpointed.

The new phone, which was developed by Casio Computer Co., Ltd., is a folding clamshell-type handset that features a 350,000-pixel CMOS camera module incorporated into the back of its LCD panel (photo, upper left) and a 12.8MB memory that can store up to 800 photos. When the user selects the “attach location” option from the phone’s menu screen and then takes a photo and sends it to another person the recipient gets both the picture and a map showing the place it was taken.

According to KDDI, mobile phones with built-in cameras are proving a hit with consumers — at present half of all new au subscribers are opting for such camera-equipped phones.