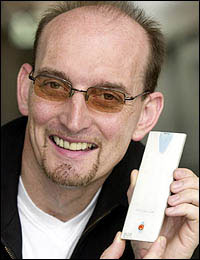 “Brainy student Stephen Forshaw has invented a mobile phone made from PAPER.

The inventor has scooped a top award with his creation, interested electronics giant Sony — and now he hopes it will ring up a fortune.

His invention is named PS Call Me, and aims to get mobile phone fans writing “special” letters again — instead of just calling or texting.

Stephen hopes someone wanting to propose to a lover or communicate with a faraway relative buys one of his packs.
Inside is fancy writing paper with a tiny electronic chip buried in the embossment.

The pack includes the chip’s “phone number” which the buyer rings from his mobile or land-phone, logging it in his handset’s memory.

He then writes a letter — perhaps a Valentine’s message — in the normal way and posts it. The recipient opens the letter,reads it, folds the paper into an oblong phone shape and places a tiny supplied earphone in her ear.

They then press the chip where indicated making it ring the sender’s number. The pair then have a phone conversation, with the recipient using the chip as a mouthpiece.

The chat — perhaps a proposal — is recorded on the chip as a keepsake lasting forever.”