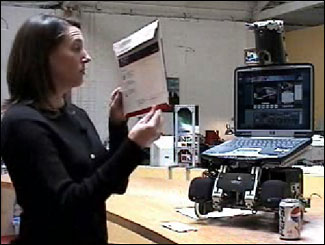 The ER1, available in two configurations, is the first in a line of autonomous personal robots that Evolution Robotics plans to introduce over the next year, and which truly brings robots into the mainstream consumer market.

The ER1 Personal Robot, retailing for $599, is the first easy-to-use personal robot system that provides robust real world functionality, allowing early-adopter consumers to own mobile robots that can be trained to autonomously perform tasks for them. For example, users can instruct their robot to respond to voice commands, take photographs of its environment and send them to an email address, play music from a CD it recognizes, read books from pre-recordings and send reminders to its owner. The ER1 will be sold through www.evolution.com, as well as through selected retail outlets and catalogs, and will begin shipping in the summer of 2002. Also being announced is the ER1-K personal robot kit for hobbyists, for $499. The ER1-K includes stepper motors, a motor controller that plugs into a laptop, a USB camera, the same GUI-based ER1 software control center and the XBeams™ aluminum building system for easy construction. The kit can be easily assembled in under an hour and has the same functionality as the ER1 with the added benefit of being reconfigurable to different shapes and accessories. Both robot products require a laptop to run the system and interface with the other hardware components.

“Robotics have fascinated the world for nearly a century, but beyond industrial or pet robots they have not provided real functionality for the home or workplace. In order to be valuable, a personal robot needs to see and understand its environment. Evolution Robotics has achieved that breakthrough. With the processing power that’s now available in today’s Pentium processors, and a patent-pending vision algorithm that can actually recognize objects and its environment in a real world setting, the ER1 is the first personal robot that can navigate and act based on vision,” commented Bill Gross, Founder and Executive Chairman of Evolution Robotics.

The ER1 Personal Robot System provides an array of features and built-in functions including:

Photography and video to capture events;

The most powerful feature of the new ER1 Personal Robot System is its software control center. This software allows a user to control the robot from a dashboard by merely clicking buttons and selecting from pulldown menus. The user clicks on an “if” condition (i.e. “If you see red,” “If you hear a sound,” “If you receive an email from Joe”) and adds an “action” response (i.e. “Play a song,” “move forward 10 feet,” “take a picture”), to train the robot to execute and perform specific tasks and activities.

“The emerging personal robot industry is ripe for a consumer robot like ours. We believe the remarkable performance and capabilities in our inexpensive robot will show consumers how a personal robot can carry out useful tasks and ultimately become an indispensable tool for every household,” said Bernard Louvat, President and Chief Operating Officer of Evolution Robotics. “Over the next year, we plan to develop and expand our line of personal robot systems by adding various technologies and accessories, allowing users to build more compelling personal robots that are able to perform tasks for the home and workplace such as helping children to read, mobile video-conferencing, security applications, entertainment, delivery and reception applications. We will also work with partners to license our technology platform for new and existing products.”

“Evolution Robotics has developed a robust personal robot system that allows technology enthusiasts to own functional robots that can perform day-to-day tasks for them. We anticipate strong demand for this type of robot and think this will be a hot-ticket item for any consumer,” commented Carl Fiorentino, President, TigerDirect.com, a leading computer and consumer electronics retailer. “We are looking forward to offering this type of affordable and powerful technology to our customer base and think it will create a big impact”.

The introduction of the ER1 follows a recent announcement by Evolution Robotics to begin shipping its Robot Developer Kit (RDK). The RDK is an industrial-strength kit, with the necessary software and hardware tools needed by professional developers and manufacturers to quickly create autonomous personal robot prototypes, with minimum complexity. Based on the Evolution Robotics Software Platform that was unveiled at the Company’s launch in February 2002, the Linux-based RDK includes a complete robot control architecture with ready-to-use capabilities, such as following a target, detecting and avoiding obstacles, listening for voice commands and responding with speech, and exhibiting personality.