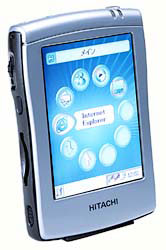 The new Hitachi PDA is one of the smallest on the market. But the NPD-10JWL (this is its name) has many other battle steeds. This device is surprising because of the absence of keys on the front part, which is completely smooth and entirely occupied by the TFT 3.5” display of 240 x 320 pixels and a resolution of 65,536 colours. There are also new features in terms of hardware, above all in the architecture, which is Xscale at 400 Mhz. To complete the features, it has the new Microsoft operating system, Windows CE.NET which integrates Internet and voice communication in a single packet (if the antitrust authorities aren’t against this proposition).

The NPD-10JWL measures just 108 mm of length, just like a traditional cellular phone of the latest generation. It measures 77 mm of width and 17.8 mm of height, while the weight is surprisingly elevated if you consider it in relation to its size, a good 160 grams. This figure is probably justified by the inclusion of a series of WLAN functionality for wireless communication. The memory of the NPD-10JWL is relatively scarce seeing that we are dealing with a Windows CE device: 32 MB of RAM and 32 MB of FlashROM. The unit has a port for SD and MMC cards. To connect to other devices you can also use a USB cable. The software features are wide and varied. Aside from the operating system we find the Internet Explorer browser in version 5.5, Windows Media Player, Windows Messenger, Active Sync and Picture Viewer for viewing images among other applications.

This device was presented in the frame of the Microsoft Embedded Developers Conference 2002, recently held in Tokyo. Hitachi will release the product on the Japanese business market but does not exclude a possible release on the Old Continent.