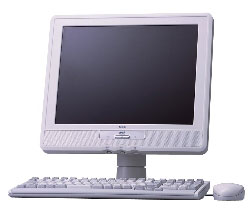 NEC Corp. introduced a desktop PC that is, as advertised, to be as quiet as the sound of “the leaves rustling.”

Named as “Mate,” the PC-MA80W/F model has the microprocessor’s operating frequency of 800MHz (price: from 215,000 yen) and the PC-MA90W/F model has that of 900MHz (from 230,000 yen). It is said that the volume of the noise is about 20bB when no HDD or CD-ROM is running. They are sold through built-to-order system, so users may have it equip a wireless LAN module.

As for (1), a structure where a fan is not installed was employed. For this reason, “Crusoe Processor Model TM5800” of Transmeta Corp. is adopted, which generates less heat as a microprocessor (the specifications are the same as the TM5800). TM5800 has been thus far used only for notebook PCs or the thin-type server called “blade servers.”

As for (2), a fan was not installed either. An AC adapter currently used for notebook PCs was used in place of the power supply unit, which was conventionally built in the main unit. As for (3), a HDD using a fluid dynamic bearing spindle motor was adopted in order to reduce the rotation noise of the motor. Instead of a 3.5-inch HDD for desktop PCs, this product adopted a 2.5-inch type, due to the fact that HDDs using fluid dynamic bearing spindle motors are restricted to 2.5-inch type.

It is said that these changes were effective not only in noise reduction but reduction of power consumption. The power consumption while operating (when peripheral equipment is not connected) was reduced to about 31W, which is about 16 percent lower than the company’s conventional LCD all-in-one models.

The company positions this desktop PCs as high-end models for businesses. “At the moment, there is no plan of adopting the same kind of parts in low-end business models or consumer models,” said NEC. Especially, since the shipment quantity of HDDs using fluid dynamic bearing spindle motors is few and costly, adopting such in the models sold in large quantities or sold at low prices is difficult.