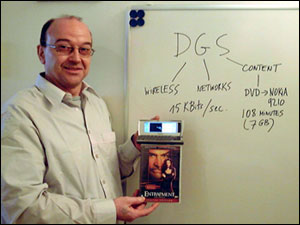 The company MILLENNIUM GATE N.V. is proud to present a new strong technological performance of the Belgian electronic wizard Guillaume Defossé: a standard NOKIA 9210 adapted with his DGS-Operating System able to play a full feature movie @ 25 frames per second. The test movie is 108 minutes. The movie is stored on only one flash memory card of 16 MB (from which 11 MB is used for the OS and other software!). Guillaume optimized also the power consumption to 15 hours. Also great for PDA’s.

Monday, March 18, 2002, Guillaume Defossé gave a number of limited demonstrations on the CEBIT 2002 technology fair in Hannover (Germany) for the press and a number of selected companies. Journalists like Peter Dykes of CeBit News were excited by the demonstration.

DGS is a new and more efficient way of formulating digital processing and electronic operations, and is multi-platform. You can compare this with actual computers being traditional cooking by boiling and backing and DGS being microwave cooking today.

The DGS Technology will be able in the future to make all wireless devices more performing due the much higher efficiency of the processors and the DGS-architecture, and will allow access to files which are actually too large to send over wireless network or are too expensive. The very efficient (tiny file size/ 15 Kbit/s and less) transmission will allow to send to customer high action video (of example football, horse races – 25 fps), broadcast TV or distribute movies on different types of wireless connections.

Dirk Laureyssens, Chief Operating Officer of Millennium Gate: “Our aim is first to work together with a number of technology partners, manufacturers and content providers to create DGS-products. The time-to-market can be rather short for a number of off-the-shelf consumer products when changes are minor (only on the software level, a plug-in, etc.). Of course a lot of tests need to be done, think about networks, digital rights management, security,etc. but DGS-files can also be wrapped in a MPEG-4 jacket (like 3ivx).
Consumers want to have maximum performances and DGS is able to give that. Especially wire-less products are a good show-case because they are practical, represent freedom and are also the symbols of technology. DGS will speed up access to interesting media files (high action TV, movies, music videos, comics, …) and fun communication (like MMS and video mail). People love to communicate and DGS creates almost today a new payable platform for everyone. For content distributors new business models can be applied much faster than projected in the UMTS-model, and that can be good for the consumer and the replacement market. On Guillaume Defossé I want to say this: It’s a brilliant guy, I call him the second Tesla.”

Business models on TV-broadcast, News distribution, movie trailers, Video-Clip distribution, etc. over wireless networks/devices become very realistic for mass-markets. For example: a music video clip (±100 kb) for PDA can be sold for the price of two cigarettes instead at $2.50/Euro3,-. That makes the difference between a market of 3,000 people or 3,000,000 people. Quiet different. MMS become faster possible. Broadband infrastructure can be used more efficient. But this means also offering rich media to simple modem users (which is still the largest part of network users on the globe) like in Southern Europe countries, South East Asia, South America.

That’s however a small piece of the whole. DGS is very versatile. For example: Guillaume Defossé can handle files suitable for Digital CINEMA (4K) at very acceptable file sizes. New digital camera’s will be developed in the near future able to shoot 4K or 6K, and that’s what Spielberg and Hollywood wants .