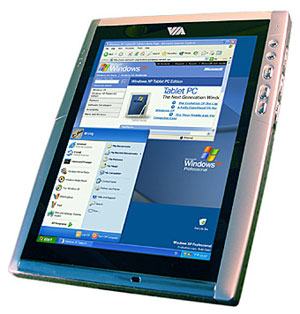 VIA Technologies, Inc, a leading innovator and developer of silicon chip technologies and PC platform solutions, today demonstrated its new VIA Tablet PC design at the WinHEC 2002 event in Taipei, Taiwan.

The VIA Tablet PC design is an attractive slate-style ultra portable PC, combining an innovative ‘digital ink’ system with a 10.4″ electro-magnetic digitizer portrait screen to form the ultimate digital notepad, with universal applications in business and the home. Less than one inch thick and weighing just over one kilogram, the VIA Tablet PC design is considerably lighter and less bulky than a conventional laptop, it supports the full functionality of Microsoft Windows XP Tablet PC Edition as well as a full range of cutting edge connectivity features including USB 2.0, IEEE 1394 and optional 802.11b wireless support.

The VIA Tablet PC design utilizes a rich array of VIA’s industry leading low power technologies, including a choice of the highly acclaimed VIA C3™ EBGA and the VIA EdenÔ ESP processors as well as the high performance VIA Apollo Pro266T DDR SDRAM chipset. This not only ensures longer battery life and quieter operation, but also reduces system cost and enhances compatibility and reliability.

“We are proud to be launching the VIA Tablet PC design at WinHEC,” commented Richard Brown, Director of International Marketing at VIA Technologies, Inc. “The Tablet PC represents a very exciting new market segment with exceptional long term growth potential.”

“We are excited to see the Tablet PC work that VIA is doing. The Via Tablet PC offers the full power of the PC in a sleek design,” said Alexandra Loeb, vice president of the Tablet PC division. “This impressive design, combined with the high performance processor and long battery life it offers, will provide customers with a great mobile PC alternative.”

About the VIA Tablet PC Reference Design
At the heart of the VIA Tablet PC design is the VIA Apollo 2002, a highly integrated double-sided mainboard specifically designed by VIA for thin and light ultra portable applications. It is powered by a choice of VIA C3™ or VIA Eden ESP processors, which combine powerful performance with highly efficient thermal properties that enable passive ‘fanless’ cooling and exceptionally small footprint designs. Performance and power consumption are further enhanced by the VIA Apollo Pro266T chipset, with its support for high bandwidth DDR SDRAM memory running at 3.3 volts compared to 5 volts for standard DDR SDRAM.

Rich I/O integration affords a wide variety of connectivity options, including high speed USB 2.0 and IEEE 1394 ports, a PCMCIA slot, a RJ-45 port, and infrared functions. A whole host of VIA companion chips are incorporated into the VIA Tablet PC design; for example, networking capabilities are enabled through the VIA Tahoe VT6103, onboard audio through the VIA 6-channel audio codec, and IEEE 1394 capability with the VIA Fire II VT6306.

With the VIA Tablet PC design targeted at the business and home markets, this device has been developed with portability, productivity and connectivity in mind yet without sacrificing style. Function buttons are low profile and complement the device’s smooth design and feel, comprising the power on, brightness, volume, page up/down, Tip/Tap feature and the ‘Enter’ command, while the silver chassis is appropriate in a professional or home setting.