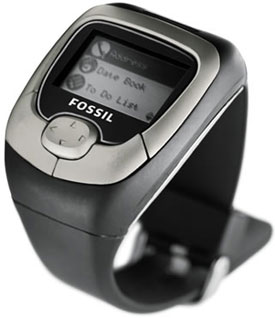 Fossil, Inc., one of America’s leading watch and accessories companies, today announced the introduction of two new products: the Wrist PDA™ and Wrist PDA/PC™ – the ultimate companions for PALM Powered™ or PocketPC handheld devices. These products are the first high-tech devices in the FOSSIL line providing the convenience and portability of a watch with the storage capability of a handheld device.
“As the world’s leading manufacturer of handheld computers, Palm is delighted to welcome this exciting new product, as well as one of America’s favorite watch companies, Fossil to the growing Palm Economy,” said Claudia Romanini, senior director, Custom Solutions Palm, Inc.

Data from the user’s PDA is downloaded to the watch through an infrared interface, the popular beaming technology currently found in most handheld devices. The watch’s built-in applications provide read-only capability and can store a maximum of any one of the following items in the 190KB of available memory:

Users access their data through easy to use drop-down menus navigated by a four-direction button on the watch. Users can also receive up to twenty business cards beamed from handhelds or other Wrist PDA watches.

“The Wrist PDA and Wrist PDA/PC devices give the approximately 17.5+ million handheld users around the world the freedom to take their information anywhere they go making their data wearable,” said Donald Brewer, vice president of technology, Fossil Inc.