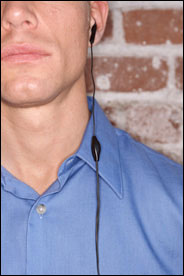 Chipmaker Infineon Technologies is weaving its products into an entirely new fashion industry: high-tech textiles. The Munich-based company on Friday showed off new prototype wearable chips that it says can be sewn directly into clothing and other textiles.

Infineon’s Emerging Technologies Group has developed chips, sensors and packages that allow the processors to be woven into fabrics. Special materials woven into the fabric are used to connect the chips and sensors.

One new application for Infineon’s wearable electronics, for example, could be for personal entertainment, the company said.

Infineon has developed a prototype MP3 player that can be sewn directly into shirts or jackets. The player, consisting of a chip, a removable battery/data storage card and a flexible keyboard, includes an earpiece for listening to music.

Infineon will show off an MP3 player “jacket” at Avantex, a kind of fashion show for high-tech textiles, next month in Frankfurt.

These applications would use tiny chips, which convert a person’s body heat into electrical energy, to store information or transmit data wirelessly via a built-in antenna.