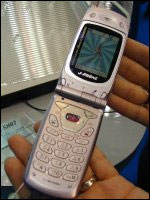 Canon Inc. and HI Corp. announced that they have jointly developed new player engine technology that will allow people to play Macromedia Flash content on their mobile phones.

The two firms say they will start shipping the product to mobile phone manufacturers this summer as an optional part of HI’s Mascot Capsule 3D graphics engine. Mascot Capsule engine chips are currently employed in J-Phone and au handsets.

The new graphics engine will enable content created using Macromedia Flash Version 4 to be played at 15 frames per second even on second-generation (2G) phones. The engine can operate on a CPU at speeds of upwards of 10MHz, and run programs that are around 60KB in size.

The new engine was developed by combining Canon’s Thin Client Imaging Engine (TCIE) — developed by Canon Information Systems Research Australia, a Canon group R&D affiliate — with HI’s Mascot Capsule engine. The new engine is compatible with some features of Flash Version 4. (The latest edition of Flash is called “MX” which corresponds to Version 6). By the time a commercial version of the engine is made available to phone makers, the two firms plan to incorporate Flash action script functions into it as well.

K Laboratory Co., Ltd. and Macromedia Inc. first unveiled a mobile phone environment capable of playing Flash content last November. But that technology called “K-tai Flash” does not actually play the Flash content as it is. It first converts it into a Java application.