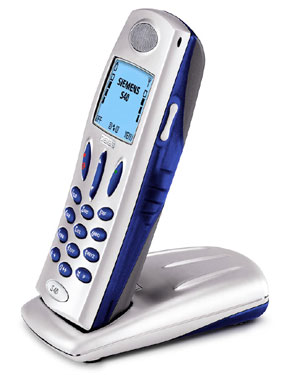 “With Rogers AT&T Wireless completing the installation of its new GSM/GPRS network to provide advanced wireless services from coast-to-coast, this partnership is a key milestone for Siemens in our plans to be a leader in the Canadian mobile market,” said Andreas Mueller-Schubert, Vice President, Information and Communication Division, Siemens Canada Limited. “We look forward to working with industry leaders such as Rogers AT&T Wireless to bring unique wireless devices to Canada.”

About the Siemens S40 mobile phone

The S40 is a triband Global System for Mobile Communications (GSM) mobile phone featuring exceptional performance, high-end functionality, and a stunning design that includes a galvanized silver face, a blue illuminated display, and a transparent blue housing. Triband GSM mobile phones will work with more than 400 operators in 179 countries/areas of the globe, making the S40 one of only a half-dozen such phones in the world. The S40 is capable of synchronizing with Microsoft Outlooktm calendar, address book, and notes by direct cable or via IrDA connection to the PC.

Weighing only 3.4 ounces, the S40 is one of the smallest and lightest mobile phones in its class. The thin Lithium Ion (Li-Ion) battery lasts for up to 260 hours*, with a talk time of up to 6 hours*. The phone comes with a travel charger, Lithium-Ion battery, and CD-ROM with synchronization software.