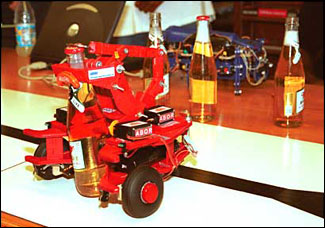 An engineering student in Florida has invented a robot which opens his beer bottles for him.

It runs along a bar top, steadies the bottle, places the opener under the cap and lifts it before backing off.

The machine has been named Abor, which stands for Autonomous Beer-Opening Robot.

Abor was built at the University of Florida and can even open screw-top bottles.

Its designer Jean-Philippe Clerc says he went through 134 beers for calibration and testing purposes.

But the master’s student from the French Caribbean island of Guadalupe says he prefers wine and champagne.

He said: “I was trying to do something that was unusual and had never been done before.”

The robot is built from 150 parts, has 60 feet of wiring and took four months of work.