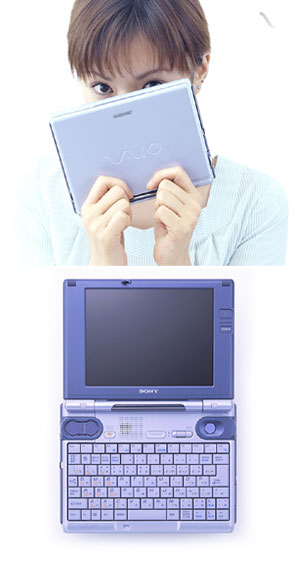 Sony Corp. announced two Vaio notebook PC models, including one with a 6.4-in., TFT-LCD screen that features compactness. The “PCG-U1” model features a 820g compact body with a 6.4-inch (XGA) TFT-LCD. Another model “PCG-C1MSX” housing an MPEG2 encoder provided with a TV reception unit as an attachment.

The “PCG-U1” is the smallest and lightest model of the entire “Vaio” series. It is designed for easy operation even if the user is holding it in a standing posture. Assuming use with both hands holding the body, the PC has a “wide-stick” for the thumb of the right hand for handling a mouse cursor. On the position where the thumb of the left hand is laid, there is a button that works as the right/left button of a mouse. Also installed is a “Zoom In” button on the right side of a liquid-crystal screen that changes the resolution from 1,024 x 768 dots to 800 x 600 dots for easier reading of small letters.

Other than the above functions, the PCG-U1 model has a “ThumbPhrase” function on the nine keys allied on the left side of the keyboard marked with characters in orange. These keys are assigned a character-entering system so that the user can enter characters the same way as a mobile phone. A “Jog Dial” for scrolling is also mounted. The preinstalled software includes “Adobe Acrobat eBook Reader 2.2” for reading electronic books and “FlyingPointer” for exchanging files with other Vaio PCs.

PCG-C1MSX is a successor of “PCG-C1MRX” introduced in 2001. The MPEG2 encoder functions of recording images from a CCD camera and a video deck in a HDD are also equipped. It adds a “port replicator” an input terminal for a TV antenna. The port replicator includes a USB, a LAN port, an external display output. “Giga Pocket LE” software that comes attached is used for recording TV programs. The hard disk of 20GB can record up to about 11 hours.

The external size is 249mm x 152mm x 28mm with, it weighs about 998g. The preinstalled OS is Windows XP Home Edition.