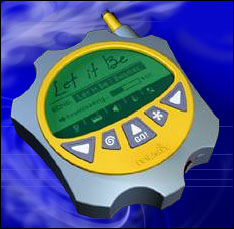 The Musit (TM) will revolutionize the way music lovers acquire and store their favorite songs by eliminating the need for a computer, allowing wireless music downloads anytime, anywhere on a convenient, portable device.

The Musit (TM) is a palm-size computing device with a stylus that allows music fans to simply write-in a song title or artist name on the screen. The Musit sends a query to an Internet-based distributed database called the DieCorpNet (TM). Musit (TM) quickly lists matches to the music fan, who then clicks on the desired song, for a wireless download.

The Musit(TM) stores the songs in MP3 format on CompactFlash (TM) media. Once a song is fully downloaded, the Musit works much like any portable personal music listening device. There is a standard audio jack for headphone or amplified listening. To learn more about the Musit (TM), visit the DieCorp (TM) website at http://www.diecorp.net .