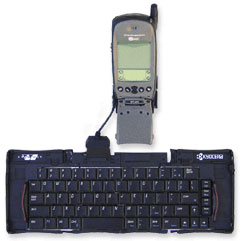 When the QCP-6035 became available I was the very first one in line to get my hands on the Palm/Phone combo. Love that phone as I do though, Graffiti has just never been a workable solution for any decent amount of data input. So I suffered for a bit and still carried my laptop for detailed entries. Well, after months of regular e-mail harassment, the folks at Thinkoutside sent me their solution: A full sized keyboard for my Smartphone.

The stuff: The keyboard itself looks just like the other, IBM Thinkpad style, fold out models from the company. There’s plenty of info out their on these products so I’ll keep the spec details light. About the size of two stacked Palm M515’s when folded, the fully extended version gives you a keyboard built for comfort. The exception for this version comes in the addition of a folding stand , specialized phone keys and connector. Since the QCP-6035 is heavier than the average PDA and has to have the flip open to access the Palm functions, a stand of some sort was going to be a necessity. As such, you unfold the stand, drop the phone into it and connect the stand’s cable, to the keyboard. The downside to this is the hefty bulk it adds to the included neoprene carrying case. Although the original keyboard could be a tight fit in a pants pocket when folded before, the addition of the stand puts it into my backpack.

Getting started: Like those before it, this keyboard needs you to load on the drivers separately via your PC before using it. The process was a snap and I was typing in minutes. The keyboard comes with specialized Palm function keys (Date, To Do, Calc, Memo , Find etc etc) which covers one touch acess to most of your usual Palm fare. For all your favorite 3rd party apps, the keyboard has a Command Key function to assign programs to each of the numerical keys. As such, if I press COMMAND and the number 4, my notepad comes up. The keyboard application also adds a mouse option allowing you to move a mouse tail around the screen with the arrow keys. Unfortunately, I didn’t find this practical enough to use with any regularity. The infamous shortcut , Menu and backlight keys however were a welcome addition and made quick work of my signatures and common text entries. Keep your pen handy in the built in wells though as not every Palm function can be accessed through the keyboard.

So, with the phone and keyboard packed into my jacket, I made my way into a Chapters for some research. With Mocha Lattee in hand, I made my way to a table and set up. My entire mobile office was ready to go in 4 seconds flat. One very cool function in this setup is the ability to use the phone as a phone while also typing data with the keyboard. With my headset on, (although I could have used speakerphone mode), I made and received calls using the voicedial/voice – answer while composing SMS, memo’s and e-mail messages. Once I completed the voice call, my phone was free to send out my data. And, since the keyboard draws power from the phone, and apparently very little of it, I was able to run my entire office from that Chapters table for the afternoon with plenty of power to spare.

Overall: I found the unit to be a lifesaver when compared to the heft of a laptop for e-mails and reports. Although the keyboard will not allow you to type while the phone is on-line, e-mails can easily be composed offline and send with the tap of a button. As to the thickness when closed, I ditched the included softcase and elected to keep the keyboard and stand in different pockets. If you like the QCP-6035 and want to make the most of it, the ThinkOutside keyboard is a great way to go.