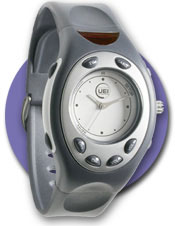 You get to play with allot of serious gear in this job but sometimes you just want to have some fun. As such, the folks at Universal Electronics sent me their Midas Remote Control Watch.

As the name implies, the watch doubles as a remote control for my TV & Cable box. It is only slightly larger than my regular fare but not uncomfortably so. The watch has an analog display with a total of 10 buttons representing TV, Cable, volume up and down, channel up and down, mute, settings and power. Instead of being a learning remote, the watch actually carries the codes for hundreds of TV’s and cable boxes and the complete list came with the instruction manual. This meant I could punch in the appropriate 4 digit code and use it just about anywhere without ever needing the original remote.

Now, for serious testing – Off To The bar. Along with several “assistants” and a few libations we showed up at a large sports bar which had about 50 TV’s going at any time. It took about 5 seconds to enter the code for Sony TV’s and begin wreaking havoc. Since the watch is fairly unobtrusive, I was easily able to change channels and volume levels at will from up to about 15 feet away unnoticed. You would not believe the reactions one can garner when Baywatch gets replaced by Martha Stewart. NBA to TLC? The fun was almost endless. As a bonus, it turns out that the bar ran their music through one TV channel. Start with Rap, finish with Bob Denver. As you can probably tell, this was minor mischief made in heaven.

Since that night I’ve used the watch almost daily. Wanna have fun with the office folk? The board room at my friends office has one Panasonic TV and 10 chairs filled with the most non-techie people known to man. So……while the meeting was in session – watching a training video, I walk by the entrance way and tap the MUTE button. I just about snapped a rib when I came back 10 minutes later to find the entire group pushing random buttons on the VCR.

Wether it’s muting the TV at my own house or setting the TV in the store display window to the local news on a whim, it’s a handy little gadget. The watch I had was set up for Cable / TV and did not work with a satellite receiver but this will be included in the version which will be sold at Radio Shack stores in Canada this summer in the $40.00 range.