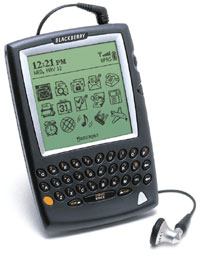 Developed by RIM, the BlackBerry 5810 from Rogers AT&T Wireless integrates the functionality and convenience of a wireless phone with the popular features of the BlackBerry(TM) wireless corporate e-mail solution as well as anytime, anywhere access to an integrated calendar, address book and task list. Mobile professionals can easily manage important information and communications by e-mail, phone, two-way text messaging and personal organizer capabilities in a single, integrated handheld. The powerful handheld is also equipped with an earpiece and microphone for safe, convenient, hands-free wireless phone calls.

“The BlackBerry solution continues to lead the industry in terms of innovation, value and completeness for business and government customers,” said Don Morrison, Chief Operating Officer at Research In Motion. “With our new BlackBerry 5810 and the Rogers AT&T Wireless GSM/GPRS network, you can now enjoy phone services as well as secure, wireless integration with your email account from a single, easy-to-use handheld.”