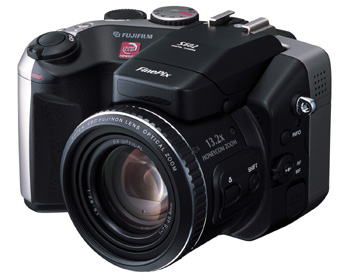 Using both external auto focus (AF) sensor and a CCD called “AF-CCD” that uses the contrast of pictures for focusing, the camera’s auto focus is faster than conventional ones. It also features a maximum output of 6.03 million pixels of data by using Fujifilm’s proprietary technology for processing signals.

As the ISO sensitivity can be set at up to 1600, FinePix S602 can take photos in dark places and at sporting events, which require a high-speed shutter. It has an improved “MEGA continuous shooting” function, which can take 40 consecutive photos — one shot every 0.6 seconds, and the “cycle continuous shooting” function, which allows users to take five shots — one every 0.2 seconds — just before taking a finger off its shutter button. The camera also has a macro shooting function that allows the tip of the lens to approach up to a one-centimeter distance from an object. These functions target intermediate to highly skilled photographers.

The camera has two types of slots, both for SmartMedia and a MicroDrive, and a 1.8-in. LCD monitor. It needs four AA alkaline batteries or nickel-metal hydride batteries as a power source.