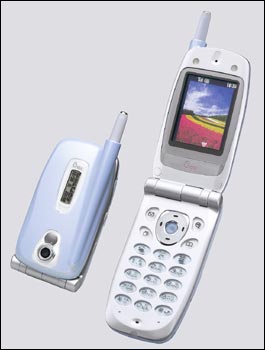 KDDI Corp. and Okinawa Cellular Telephone Co. will launch a 144kbps high-speed CDMA2000 1x third-generation cellular phone service simultaneously in major cities across Japan from April 1, 2002. Five new CDMA2000 1x (hereafter, CDMA2000) mobile handsets will also be released, including the “A3012CA”, which has a GPS service and is equipped with a 350,000-pixel high-quality camera.

CDMA2000 is recognized by the International Telecommunication Union (ITU) to be an IMT-2000 third-generation cellular communications system. Initially, 2GHz bands were required for accreditation, but the ITU later determined that frequency bands other than 2GHz, such as 800MHz bands, were acceptable in IMT-2000 systems. Overseas, six countries-including the U.S. and South Korea-and 11 companies have already begun CDMA2000 services, and 12 countries-including China, Australia and New Zealand-and 29 companies are considering commercialization.

Third Generation Cellular Phones (CDMA2000 1x)
KDDI and its “au” wireless service pioneered the development of 64kbps packet telecommunications networks across Japan, and will create a more enjoyable wireless Internet environment with data transmissions of up to 144kbps. The service will give users of the EZweb wireless Internet service, various internet service providers and users of local area network (LAN) connections download transmission speeds of up to 144kbps and upload transmission speeds of up to 64kbps.

From April 1, CDMA2000 services will cover 33 municipalities-including Tokyo, Osaka, Nagoya and 12 other major cities in Japan-and 477 regional communities. KDDI plans to expand services gradually to other parts so that, by the end of 2002, 90 percent of the population will be within the CDMA2000 service area. Since CDMA2000 handsets can still offer conventional services such as voice communications and 64kbps data transmission even outside those areas offering 144kbps data transmission, customers can use their phones anywhere in the country without worrying about the area they are in.

In April 2002, KDDI plans to launch five new CDMA2000 handsets. These new models are compatible with the GPS ‘eznavigation’ personal positioning service, with ‘ezplus,’ which can run JavaTM applications and with WAP 2.0, allowing users access to unofficial i-mode sites. As with the A3012CA GPS handset, which is equipped with a 350,000-pixel high-quality CMOS camera, all these handsets meet customer needs for compact, lightweight, handsets with extended life cycles and low prices.