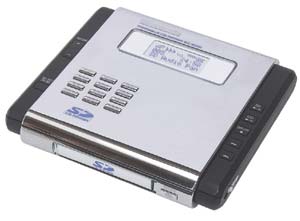 Panasonic’s new, ultra-compact SD audio recorder, model SV-SR100, can record high-quality music directly onto an SD Memory Card without using a PC. The versatile recorder plays back music recorded in the high-quality AAC1, MP32, and WMA3 compression formats, recorded onto SD Memory Cards, as well as CD-R/RW* and commercially produced CDs. An analog input even allows recording of other music software such as audio cassettes. The SV-SR100 represents a new breed of portable music devices that bring the fun and convenience of SD audio to a wider range of music fans. Panasonic plans to introduce the unit in April and is targeting a manufacturer’s suggested retail price (MSRP) of $399.95.**

“With its direct recording capability, the SV-SR100 makes it easier than ever to enjoy a wide variety of music,” said James Kiczek, National Marketing Manager for Panasonic portable audio products. “It allows consumers to enjoy the creativity and flexibility of uniquely personal music mixes, made from a variety of original sources, and offers the freedom to take that music anywhere.”

Until now, a PC was required to transfer audio data from a music CD to an SD Memory Card. With the new SV-SR100, just place a CD and an SD Memory Card in the unit and press a button. That’s all it takes to record music in the AAC compression format, with sound quality that rivals that of a CD. There’s no longer a need to transfer music data from the CD to a PC’s hard disk drive, and then use a USB reader/writer or PC card adapter to record the compressed data onto an SD Memory Card. The SV-SR100’s one-step operation brings unprecedented ease and convenience to SD audio entertainment.

In addition to playing back music in the AAC format, the SV-SR100 also plays back music recorded in MP3, as well as the increasingly popular WMA format, which is used in Windows XP.

The SV-SR100 is also equipped with an analog input terminal that allows users to transfer music collections from cassette tapes and other analog media to an SD Memory Card. It also has a terminal for connecting a stereo microphone (such as the optional Panasonic RP-VC200 or RP-VC300) for recording.

Using just two “AA” alkaline batteries (not included), the SV-SR100 SD audio recorder can deliver up to 30 hours of SD audio playback, or up to 25 hours of uninterrupted CD play, before requiring a battery change.

The SV-SR100 joins a collection of innovative Panasonic multi-format audio products that enable consumers to enjoy personal music mixes at home, outdoors and in the car.