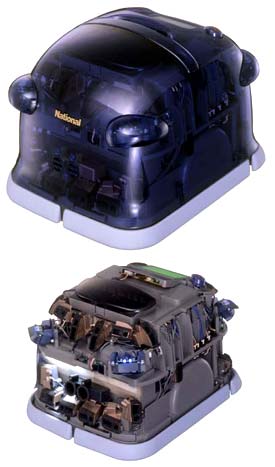 Matsushita Electric Industrial Co., Ltd., best known worldwide for its Panasonic-brand products, today announced it is developing a vacuum cleaning robot for household use through an innovative autonomous control system that uses a wide array of sensors which allows the robot to roam around a room, detect dust particles, and ensure its safety. The new prototype not only vacuums a room autonomously, but also efficiently, providing for less laborious housework and an easier lifestyle. Field testing in real Japanese households of the vacuum cleaning robot will begin in May.

While vacuum cleaning robots have been developed in the past, previous models have not been able to efficiently cover an entire room, thereby leaving behind much dirt and grime. Previous models have also not been able to completely evade dangerous areas. Matsushita’s new vacuum cleaning robot operates by optimizing its movements in compliance to the shape of the room, the type of floor and the amount of dust. The robot operates in a crossover pattern, moving vertically then horizontally around a room avoiding any obstacles in the process. The various sensors allow for the robot to operate automatically and safely while constantly sensing its surroundings. What’s best is that the vacuum cleaning robot is as powerful in picking up dust as regular vacuum cleaners.

Some of the new technologies being used in the new system are the following:
Obstacle Detection System: sensors that detect distance between the robot and obstacles

Running Control System: a gyro in the main body and sensor in caster wheel that make robot move straight

Cleaning Power Control Technology: changes running speed and suction power depending on the amount of dust on the floor.

The new vacuum cleaning robot can operate for 55 minutes on one charge, slightly more than conventional cordless vacuum cleaners. Matsushita Electric expects to continue development of the vacuum cleaning robot prototype as part of a wider initiative to meet the growing need for products that save time and lighten the burden of housework. Prototypes will be exhibited at BARRIER FREE 2002 to be held International Exhibition Center, Osaka, Japan from April 11th to 13th 2002.