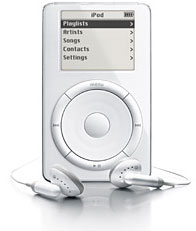 Apple® has announced a second model of its groundbreaking iPod® digital music player that features a 10GB hard drive, allowing users to pack an incredible 2,000 CD-quality songs into the iPod’s ultra-portable, 6.5-ounce design. Apple also announced that all iPod owners can now download free software that adds the ability to download and store contact lists with up to 1,000 names and addresses right alongside their music. In addition, customers can now order their new iPod with a custom laser engraving etched into iPod’s stainless steel back.

“iPod lets you easily put your entire music collection in your pocket and listen to it anywhere. With the new 10GB iPod, you can listen to your music continuously on six round-trip flights between San Francisco and Tokyo and never hear the same song twice,” said Steve Jobs, Apple’s CEO. “Plus, now you can store your contact lists inside your iPod, too.”

iPod owners can now add a special touch to their new iPod by personalizing the stainless steel back with a custom laser engraving. The iPod can be engraved with a name and/or personal message to commemorate special events such as a graduation, birthday, or a winning team’s season, as well as for identification in case of loss.

iPod is the only portable music player with Auto-Sync, an innovative feature that automatically downloads your entire iTunes™ digital music library into iPod and automatically keeps it up-to-date whenever the iPod is plugged into a Mac®. With iPod’s built-in FireWire® port, a massive 2,000 song library can be downloaded in less than 20 minutes—30 times faster than USB-based devices. The iPod’s battery provides up to 10 hours of continuous music and recharges automatically whenever iPod is connected to a Mac, using power supplied over the FireWire cable.

iPod is the first portable music player that allows users to carry all their contact information for a thousand colleagues, family and friends, right next to their entire music collection. Customers can transfer contact lists from Entourage, Palm Desktop or Mac® OS X’s Address Book into the iPod Contacts folder.

With its innovative scroll wheel and graphical user interface, iPod customers can quickly accelerate through an entire library of 2,000 songs to find and play their favorite song or quickly and easily access any of their contacts in seconds.

Apple has also added 20 EQ presets, ranging from R&B to Classical, allowing customers to adjust the iPod’s dynamic range to better match the music they are listening to. Customers can apply EQ settings to songs while they listen to them with the iPod’s Settings menu, or utilize the EQ settings that they assigned to individual songs in their iTunes library.

Pricing & Availability
The new 10GB iPod is available immediately for a suggested retail price of $499 (US), and the 5GB model remains priced at $399 (US), through The Apple Store® (www.apple.com), Apple’s retail stores and Apple Authorized Resellers. Laser engraving is available for $49 (US) and can include two lines of text with up to 27 characters per line. An iTunes 2 CD, earbud-style headphones, FireWire cable and FireWire-based power adapter are all included. Both Contact and EQ features are available for free download to current iPod owners at www.apple.com/ipod. iPod requires Mac OS X version 10.1 or Mac OS 9.2 and iTunes 2.0.4.