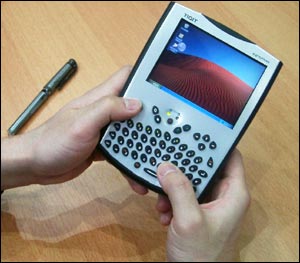 eightythree, the first computer you can use while walking that combines the portability of a handheld with the functionality and software compatibility of a Windows/Linux/UNIX PC, will be unveiled at the opening of CeBIT next week by Tiqit Computers. Previously considered impossible to engineer, let alone mass-produce, the eightythree is not a concept product. Instead, Tiqit has built a fully functioning x86 handheld device out of cutting-edge but available parts, designed specifically for enterprise use and immediate production. CeBIT, the world’s largest telecommunications and IT conference, will be held in Hannover, Germany from March 13 – 20.

eightythree offers clear benefits to the enterprise community. Workers gain increased mobility and function with a device that allows them to depend on a single operating system, and companies can dramatically reduce their total cost of ownership. Possessing the storage capacity and processing power to enable the extension of many software services to areas formerly unreachable, the eightythree also has the flexibility of using all of the software and hardware extensions currently available in the mainstream PC market.

“This product will greatly accelerate adoption and use of handhelds in the enterprise,” said Ian Blasch, CEO, Tiqit Computers. “It uses standard operating systems – Windows XP, Linux or UNIX – and is compatible with all associated applications, including legacy software. Almost anything you can do on a laptop or PC, you can do on eightythree – only it is smaller and more mobile.”

“Mobile workers like claims adjusters, salespeople, factory personnel or medical professionals could immediately benefit from having the power of a desktop that fits in their hands,” continued Henry Berg, President, Tiqit Computers. “It is supremely compatible as a hardware device – it has all the standard ports, an SMS keyboard and the best resolution screen on the market, not to mention good battery life.”

The eightythree form factor is 5.4” long, 4”wide, 1.1” thin and weighs just 20 ounces. It is the size of a large PDA, has laptop-quality screen resolution, SMS keyboard, thumb-operated micro joystick with mouse buttons, touchscreen, a cardbus PC card slot to support all standard wireless modems, a USB port, a Secure Digital (SD) slot and internal speaker. Therefore, it connects with other standard devices, from digital cameras to bar code scanners to docking stations. On the software end, it incorporates all the applications you would find on a laptop or PDA, including voice communication, e-mail, web access, PIM, enterprise applications and the ability to download attachments.