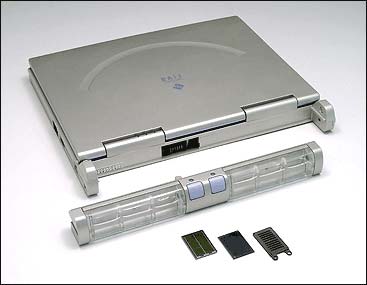 The newly developed fuel cells are available for a wide range of applications, such as laptop computers, digital cameras, PDA, and pocket TV receivers, thanks to their compact size and long lifetime.

Casio’s fuel cell technology will be officially presented at a chemical engineering conference to be held on March 27, 2002. More than 100 inventions have been made concerning Casio’s fuel cell and the patent applications thereof have been already filed in Japanese Patent Office and other countries.

By lowering power consumption, Casio has realized and put in the market various products using solar batteries, such as easy-to-use calculators and timepieces, which are kind to the environment. However, it is hard to use solar batteries for current portable information devices such as laptop computers and digital cameras, since these devices have high power consumption resulting in a short battery lifetime. Issues to be solved reside in increasing a lifetime of a battery, and at the same time development of a high efficiency battery has been waited for. The batteries now available in the market consume much energy in the manufacturing process, and involve problems against the environment in the disposal process.

In the meantime, fuel cells have been developed as a green and next-generation energy source of high efficiency and used partially for automobiles and home appliances.Recently, researches have been announced of direct-type fuel cells as a small-sized fuel cell suitable for portable devices but these fuel cells have not yet been in practical use.

In this Compact reformate fuel cell of a super high efficiency, a reformer produces hydrogen from fuel or alcohol such as methanol, and electric energy is generated from the hydrogen through a generating cell.

The reformer, so-called a unique micro-reactor formed on a silicon wafer causes chemical reaction to reform methanol to hydrogen gas in the presence of catalyst at a reforming rate of more than 98%. This is the first success in the world in minimizing fuel cell of such high reforming rate.

The generating cell, which brings chemical reaction between oxygen and the produced hydrogen, and has extremely high power-generation efficiency per area, provides much energy, though compact in size.

The newly developed fuel cells are available for a wide range of applications, such as laptop computers, digital cameras, PDA, and pocket TV receivers, thanks to their compact size and long lifetime. A laptop computer with Casio fuel cell using methanol will be half in weight and provide about four times in the battery lifetime compared with a laptop computer using a Lithium ion rechargeable battery, which we use in our daily life. Casio fuel cell allows Casio handheld computer (Cassiopeia FIVA) light in weight and run continuously for more than 20 hours.

Casio began research of the fuel cells in 1998, development thereof in 2000, and has realized basic performances of the fuel cells in the last 2 years. The special feature of Casio fuel cell, that is, Casio’s silicon wafer device with micro-reactor function has been developed independently by the staffs of Casio’s research division. The catalyst used in the micro-reactor has been developed, and made in compact, showing a high performance under the guidance of Professor Akira Igarashi of Kogakuin University in Japan. More than 100 inventions have been made concerning Casio’s fuel cell and the patent applications thereof have been already filed in Japanese Patent Office and other countries.

Casio aims to commercialize this fuel cell in 2004 and will advance R & D forwards to improve their performance and to develop applications to various devices.