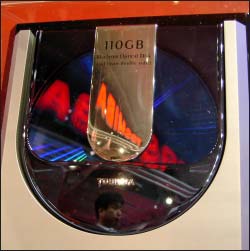 Toshiba Corp. is displaying a new type of double-sided DVD capable of storing 110GB of data at the CeBIT 2002 event being held March 13 through March 20 in Hannover, Germany.

Toshiba also has recently developed another type of new next-generation DVD as a potential follow-up to current DVDs. Those discs, onto which data is read/written using blue-violet laser technology, are single-sided and hold 30GB of data.

The new type of 110GB disc has been developed using the same basic technology, but both sides of the disc are used, along with the dual-layer construction, according to Toshiba.

The new disc employs the same land/groove-format recording track as the 30GB version. In order to avoid signal losses in the lower layer, the 110GB disc uses slightly bigger recording marks than the 30GB disc. The marks are stretched a little longer in length, which means that a single side of the new disc can hold 55GB.

Toshiba is testing the DVD for data recording and playback, but as yet no detailed information has been made available as to the shortest possible length that the marks can be. The track pitch is unchanged.

Toshiba is preparing to encourage the DVD Forum to adopt the 30GB disc as the next-generation industry standard DVD technology. The company is saying that it will also incorporate the new both-sided, dual-layer disc into its proposal.