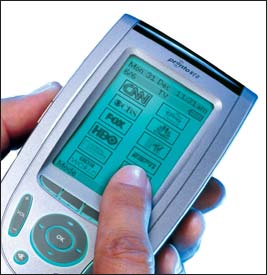 Bringing it mainstream
The ProntoNeo features a backlight touch-screen LCD display with a resolution of 160 x 100 pixels.
The unit incorporates 15 hard buttons for basic functions and utilizes cursor control for easy navigation.
With the on-board universal database and included Pronto NEOedit software, users can customize their touch-screen by simply connecting or synching-up the remote to any PC. Unlimited macro-command capability is available as well.
Due to the large database built-in, the ProntoNeo controls virtually all IR-controlled audio and video equipment.
It offers an intuitive graphical user interface and holds 1MB of flash memory, for programming as many macros and commands per macro. Any functionality can be copied from the original remote to the ProntoNeo, making it flexible and future proof.