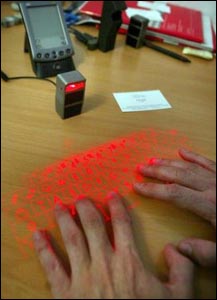 A full-size fully functional virtual keyboard that can be projected and touched on any surface is shown by Siemens Procurement Logistics Services at the CeBIT fair in Hanover, northern Germany, on Monday, March 18, 2002. The virtual interface from Developer VKB Inc. from Jerusalem in Israel can be integrated in mobile phones, laptops, tablet PCs, or clean, sterile and medical environments and could be a revolution for the data entry of any mini computer. The mini projector that detects user interaction with the surface also simulates a mousepad. The biggest computer fair of the world is open for public until Wednesday, March 20, 2002.

VKB has developed a highly efficient method for projecting an optical image of a keyboard onto a surface. In addition, VKB has developed a detection method through several proprietary developments for the accurate and reliable detection of user interaction, such as typing or cursor control functions (e.g. mouse or touch-pad controls). VKB has resolved all the technological hurdles required to make a practical virtual interface. Include minimizing the power consumption, minimal component size, simple processing, high accuracy and ease of use. VKB has filed numerous patents on its core technology and related applications.