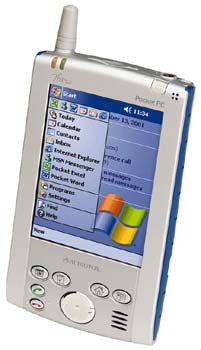 It takes more than a manufacturer to make a product succeed, it’s often said – and just to make sure, Audiovox seems to have safeguarded itself when it announces its new Thera Pocket PC 2002 based device with integrated CDMA2000 1x-RTT capabilities. Microsoft, Sierra Wireless and Verizon Wireless also joined in on the announcement, all to show off what could be one of the most interesting wireless-capable devices aimed at the U.S. market in quite some time.

The new Audiovox Thera (a word that means opening or gateway in Greek) has an integrated CDMA2000 1xRTT module which provides wireless voice and data communications capabilities without having to use any add-on modules. Verizon Wireless will distribute and market the new wireless Pocket PC, beginning this spring, to enterprise customers through its national sales team, to customers in specially designated Verizon Wireless retail locations nationwide, and on the company’s website.

Consumers who would like to purchase the Thera are most likely out of luck; according to the information provided by Audiovox and Verizon Wireless, the companies do not seem to have any intentions of making the device available for consumers at this time – even if they could afford it.

The Thera runs on Microsoft’s Pocket PC 2002 operating system, and uses Sierra Wireless’s new SB555 Embedded Module and Watcher modem management software to enable wireless phone and data calls anywhere within Verizon Wireless’ network. The SB555 module also supports two-way SMS messaging, however no information was provided on whether the Thera is making use of that feature. When used on Verizon Wireless’ new Express Network, the Thera will provide mobile data transmission speeds of 40 to 60 kilobits per second, and can also be used as a dual-band (CDMA 800 MHz and 1900 MHz) wireless phone.

Manufactured for Audiovox by Toshiba (easily spotted by its resemblance with the Toshiba e570 series Pocket PCs), the Thera measures 3.05″ x 5.02″ x .77″ inches (77.5 mm x 127.5 mm x 19.5 mm), and weighs in at 7 ounces (199g). The unit offered by Verizon Wireless runs on a 206 MHz Intel StrongARM SA-1110 processor, has 32 MB of Flash ROM, 32 MB of RAM, and comes with a bundled 32 MB SD memory card. From there leads the simple deduction that the Thera is equipped with an SD card slot, and in addition there’s also an infrared port in place. The radio communication time of the device is listed as up to 3 hours, while the radio standby time is listed as up to 100 hours and operating the device as an ordinary Pocket PC as up to 10 hours.