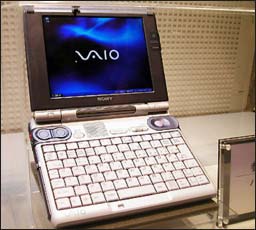 Sony Corp. disclosed a prototype of its popular “Vaio” notebook PC to come out next, named “Vaio U,” in a press briefing.

It is as small and slim as a hardcover book. The concept of Vaio U is a “ubiquitous-age notebook PC” to provide ease of operation even when the user is in a standing position. It is expected to go on sale this summer.

“Vaio U is a product positioned between the precedent Vaio and small information device CLIE. We want to make it ‘smaller’ and ‘lighter’ than current notebook PCs as an information device we can use while standing on the busy street,’ Vaio Notebook Computer Co. President Keiichiro Shimada said. “The U of Vaio U stands for ‘ubiquitous, ultimate, or useful’,” added Shimada, who is in charge of Vaio product development at Sony.

Vaio U has not been priced yet, but the communications interface and other added-value features it is estimated somewhere between 200,000 yen and 250,000 yen in consideration of the prices of other hot-selling portable notebook PCs in the market.

The prototype of Vaio U has a PC card slot, a microphone, and an earphone on the left side and a Memory Stick slot on the right side. On the right side on the keyboard there are a pointing device operated by the thumb and a “jog dial” button characteristic of Sony.

Beside ordinary black characters engraved, on the left part of the keyboard, there are also numeric numbers and alphabetical characters printed in orange on the keys with the same alignment as a mobile phone. In view of the layout of those marked keys, Vaio U may be intended to be used like an i-mode handset in combination with a communication module.

Details of the prototype presented in a glass case have not been announced. Windows XP Home Edition is used as the operating system.