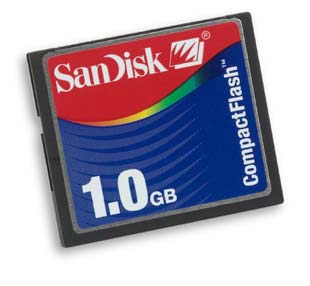 The growing popularity of high-resolution digital cameras, digital music players, Pocket PCs and other consumer electronics products is boosting demand for large-capacity CompactFlash cards. SanDisk is showing its 1GB CF card and other removable storage cards and accessories at its exhibit location in Hall 21, Stand D23 at the annual CeBIT trade show in Hannover, Germany.

“As consumers acquire more electronics products that use the popular CompactFlash Type I cards, the demand for high capacity cards like the 1GB SanDisk CompactFlash card will continue to increase,” said Gerrit Van Hofwegen, SanDisk’s EMEA (Europe, Middle East and Africa) director of sales. “The ability to store a combination of video, images, music and data on a single card is very compelling and opens up new ways for people to use their devices.”

CompactFlash cards, originally introduced by SanDisk in 1994, use solid-state flash memory chips to store data rather than mechanical, rotating disk drives that are subject to mechanical failure and high power consumption. Additionally, SanDisk CF cards are built in the Type I format, which fit into more than 400 different consumer electronics devices. The MicroDrive and high capacity CompactFlash cards from other manufacturers are built to the thicker Type II format and will only fit in a limited number of devices available today.

The 1GB SanDisk CompactFlash card is available at many of the 17,000 retail stores in Europe where SanDisk products are sold. It is priced at under $800 (under 1000 Euros, excluding VAT).