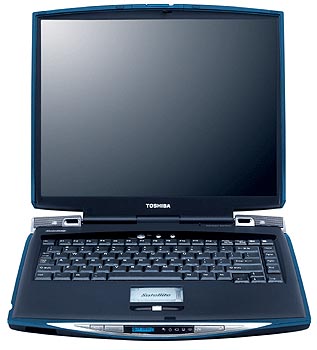 The commitment to mobility and leading technology is clear with the new Toshiba Satellite® 5105-S607 notebook PC. Toshiba’s Computer Systems Group (CSG) is the first manufacturer to bring cPad™ technology to a mobile PC. This clear, ultra-modern touchpad allows users to change the way they interact with their notebook and conveniently launch applications with a simple touch of the finger. Combined with the Mobile Intel® Pentium® 4 processor-M, Toshiba’s new Satellite pushes the envelope on innovation and performance in mobile computing.

With a push of a button, the clear cPad becomes a convenient and interactive display that allows the user to launch functions such as a calculator, 10-key, clock and date, signature input, notepad and even a customizable background. Traditional programs such as Microsoft® Word or PowerPoint® can also be accessed from the touchpad via its application launcher. Whether logging on the Internet or doing multiple calculations, an easy tap of the finger allows the user to do both on a bright, 240 x 160 pixel LCD display.

“The Satellite 5105 is quite simply mobile innovation combined with high-performing technology, giving users more out of their notebook experience with every use,” said Oscar Koenders, vice president of product marketing, Toshiba CSG. “The cPad technology is unlike anything else on the market. Combined with Toshiba’s mobility leadership in thermal management, quality and design, the Satellite 5105 represents the next step of what’s possible in the development of notebook PCs.”

Powering the Satellite 5105-S607 is the Mobile Intel Pentium 4 processor-M, 1.7GHz (1700MHz). Based upon the new Intel NetBurst™ micro-architecture, the new mobile Pentium 4 processor-M is designed to accelerate applications such as Internet audio and streaming video, 3D imaging and multi-tasking for unparalleled mobile computing performance.

The Ultimate Multimedia Notebook with All of the Bells and Whistles

Priced at $2,499, the Satellite 5105-S607 is now available via www.shoptoshiba.com or through retail channels including computer superstores, consumer electronic stores and mass merchandisers.