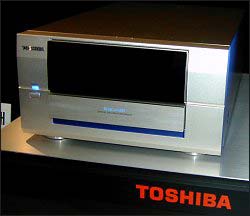 Toshiba Corp. revealed details of the technology for its 30GB-capacity optical disc with a diameter of 12cm that uses blue-violet laser light as the light source.

As for the next-generation optical discs using a blue-violet laser as the light source, nine major AV makers in Japan, Europe and Korea announced new specifications called “Blu-ray Disc” on Feb. 19, 2002. Moreover, on Feb. 26, the DVD Forum decided to begin a full-scale examination of the next-generation DVD through its Steering Committee, comprising the 17 core companies. Each company is boosting its activity with a view toward moving to commercial production from around 2003.

This time, Toshiba narrowed the track pitch to 0.29 micron, to increase the recording capacity. The land-groove system, which records on both the concave and convex parts, was adopted. Therefore, the interval of adjacent grooves is 0.58 micron, or twice as distant as 0.29 micron.

In addition, mastering has been done on a disc with the exposure using ultraviolet radiation at a wavelength of 266nm. The “double-spiral” shape is adopted for the arrangement of the land track and groove track. Generally, for land-groove discs, there are two types of track arrangement formats, from which one method is chosen. One method comprises producing a single-spiral track using an entire disc by switching one after another, from a land point to a groove and from a groove to a land point, every time it makes a round. The other method — called double-spiral — is to produce a land track and a groove track in a spiral so that they are adjoined like pyrethrum coils. This time, the double-spiral format was adopted, the company said. The format efficiency is 81.6 percent. ZCLV is adopted for the rotation control system.

The recording layer uses Ge-Sb-Te. The durability for rewriting has already been confirmed up to around 1,000 times. The phenomenon that a recording mark changes its shape when writing to the adjoining track, called crosswrite, has also been investigated. The bit error ratio did not exceed 10-4 under the condition that, first, it performed 1,000 times of over-writing to a certain track, and then, over 1,000 times of over-writing was processed to the adjoining tracks on both sides.

Both the radial tilt margin and tangential tilt margin, which is a parameter showing the degree of ease of producing equipment or a disc, exceed plus/minus 0.6 degrees when the bit-error rate is set for 10-3.

Toshiba said: “The thermal behavior of ‘a land to a groove’ differs. As for DVD-ROM, we tried to make both the same by working on the discs and recording layers. This time, we decided to absorb the difference in behavior by the control technology of the equipment. Because the circuit and the control algorithm are able to handle this, the task for a medium can be reduced. More specifically, not only the optical output during recording, but the write strategy is also dealt with by changing it at the land and groove. By doing so, the tilt margin could be extended.” (photo: optical pick-up head)

Other specifications are as follows; first, the record length per bit is 0.0986 micron. A signal detection is PR (1, 2, 2, 1) ML. The modulation code is (1, 9) RLL. The channel clock frequency is 65MHz. The error correction system is RS-PC; that is an extension of a block length from 32KB of DVD to 64KB. In addition, the file format is UDF, which is also used in the current DVDs. Data transmission speed is 35Mbps.