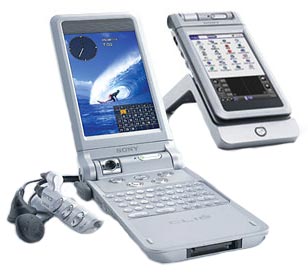 Sony released on Monday two new additions to its Clie line of handhelds. Both devices, the Clie PEG-NR70V and PEG-NR70, run on the Palm operating system, and flip open to reveal a 320-pixel-by-480-pixel color screen and a keyboard. They also come with an integrated digital audio player, 16MB of memory and a 66MHz Motorola Dragonball SuperVZ processor.

The NR70V is distinguished from the NR70 by an integrated digital camera, which is built into the hinge of the device.

Not only can consumers enter information using the keyboard, but they can also use the touch screen–the displays can swivel 180 degrees and be folded down to cover the keyboard.

Both devices feature a 3.8-inch active-matrix screen that supports 65,536 colors. A virtual handwriting area, which accepts handwritten commands, can be called up on each device’s screen. The devices include Sony’s JogDial button, which lets users navigate up and down the screen, and they support Sony’s Memory Stick expansion slot.