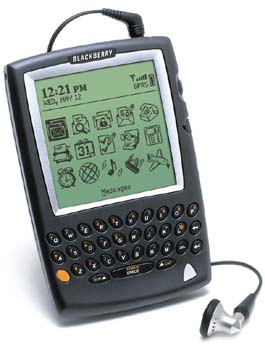 Research In Motion Limited (RIM) today introduced the first wireless handheld ready to support GSM/GPRS networks in North America. The new Java-based handheld, named the BlackBerry 5810™, allows corporate customers to manage their important information and communications from a single integrated device. The BlackBerry 5810 integrates the award-winning features of the secure BlackBerry™ wireless email solution with the convenience of a built-in phone. This breakthrough in wireless convergence delivers email, phone, SMS, browser, and organizer features in a single, sleek handheld that is “Always On, Always Connected®”. The BlackBerry 5810 also incorporates Java 2 Micro Edition (J2ME) as its core operating system, providing a secure and open platform for customers, carriers, and developers.

RIM is demonstrating the BlackBerry 5810 this week at Comdex Chicago (booth #1603) where RIM’s Chairman and Co-CEO, Jim Balsillie, will deliver a keynote address on the opening day.

In the United States, both AT&T Wireless and VoiceStream, a T-Mobile subsidiary, are now accepting orders for the BlackBerry 5810. In Canada, RIM and Rogers AT&T Wireless recently announced an agreement for the BlackBerry 5810 (product launch timing will be announced at a later date). In Europe, RIM began selling the BlackBerry 5820 (a similar handheld that operates on different frequencies for European GSM/GPRS networks) through BT Cellnet in the UK last year; and also announced working relationships with other leading European carriers including Digifone, Telecom Italia Group, Telfort Mobiel, T-Mobile and Viag Interkom.

“This is a particularly exciting time in RIM’s history and the evolution of BlackBerry. We have already deployed BlackBerry in thousands of companies and built a complete, secure corporate solution for wireless email,” said Mike Lazaridis, President and Co-CEO at Research In Motion. “Now, together with our partners, we’re building on that solid foundation in a number of ways. We’re converging email, phone, SMS, browser and organizer technologies into a single wireless handheld. RIM and our carrier partners are primed for success internationally. We’ve successfully implemented Java on our BlackBerry 5800 series. Our systems integration and ISV alliance partners are embracing and extending BlackBerry. Our handhelds, server software and infrastructure are proven and continue to lead the industry. Quite simply, the end-to-end BlackBerry solution is stronger than ever.”

“RIM is a pioneer in the wireless data industry and one of the original contributing members of the JCP Micro Edition Executive Committee,” said Rich Green, vice president and general manager, Java and XML software at Sun Microsystems. “RIM’s decision to implement Java is opening BlackBerry to a community of more than three million application developers worldwide. BlackBerry 5810 users will enjoy access to a substantially broader variety of applications that can be easily developed, deployed and managed within the enterprise.”

“Mobilizing corporate applications and enterprise email on handheld devices requires tight integration between wireless networks and back-end systems as well as end-to-end secure solutions,” said Kevin Burden, Smart Handheld Solutions Analyst at IDC. “The concept of mobile, wirelessly accessible corporate data beyond email is still new to many enterprises. This creates an opportunity for solution providers like RIM which has enterprise systems experience and continues to expand the business applicability of its BlackBerry products with J2ME and voice support.”

In related news, RIM and IBM Global Services will extend their relationship to include RIM’s GSM/GPRS products, making IBM the first IT services provider to offer business consulting and systems integration services for BlackBerry 5810 handhelds. “BlackBerry continues to be an important wireless solution for enterprise data applications and the addition of phone features and GPRS support will make the BlackBerry value proposition even stronger,” said Dean Douglas, general manager, wireless e-business, IBM Global Services. “We’re very pleased to expand our relationship with RIM to include end-to-end support and services for the BlackBerry 5800 series to companies internationally.”

BlackBerry continues to distinguish itself as the most completely integrated wireless solution for corporate customers. It is comprised of hardware, software and wireless services that are designed to meet the needs of both end users and IT departments. The BlackBerry 5810 incorporates powerful hardware and software features in an easy-to-use handheld. BlackBerry software enables easy configuration and management as well as back-end integration with corporate systems and end-to-end security. Advanced GSM/GPRS networks provide voice services and allow always-on connectivity for accessing data easily and quickly.

Handheld Design: The BlackBerry 5810 offers “Always On, Always Connected” operation with integrated voice and data features. Based on RIM’s existing palm-sized form factor, the BlackBerry 5810 is sleek (4.6” x 3.1” x 0.7”) and lightweight (4.7 oz) with an embedded RIM wireless modem and internal high performance antenna allowing users to carry and use the handheld comfortably. It features RIM’s popular “thumb-typing” keyboard, navigation trackwheel, large screen, intuitive interface and a headset jack for optional phone services. Both the screen and keyboard are backlit for easy reading and typing day and night.

Wireless Email: RIM’s patented approach to wireless email is the industry’s most advanced and popular enterprise solution. BlackBerry 5810 users will enjoy a secure, wireless extension to their existing enterprise mailbox. There is no need to worry about retrieving email since the BlackBerry “push architecture” enables email to be automatically delivered. Users can read, compose, forward, reply, file or delete messages at their convenience and synchronize their inbox and folders between their BlackBerry 5810 and PC. A variety of third-party applications even allow the user to view, print and fax email attachments using their handheld.

Integrated Phone: The built-in, high-quality phone supports GSM voice services and other optional features such as call waiting, call answer, conference calling and call forwarding.* It includes an earpiece and microphone that easily attaches for convenient, hands-free conversation allowing users to read, type or retrieve information while they talk.

SMS: Short Messaging Service (SMS) enables short text messages to be quickly exchanged between BlackBerry 5810 handhelds and other SMS-enabled devices (including cell phones) without adding email messages to an inbox. The specially designed keyboard on the BlackBerry handheld is ideal for typing SMS messages quickly.

Browser*: An increasing variety of optional wireless Internet services are available that allow fast access to select information on the web including news, travel, business and entertainment updates. BlackBerry 5810 users can use the BlackBerry browser to access their carrier’s WAP portal and other WML sites.

Organizer: A full-featured connected organizer is included with calendar, address book, memo pad and task list applications for maximum productivity. With RIM’s unique wireless calendar synchronization† features, the user’s online calendar and handheld calendar can be automatically and wirelessly synchronized without need for a cradle. This means that the user can initiate, accept or decline meeting requests using their BlackBerry handheld and their online calendar will also be updated for the benefit of colleagues and assistants trying to schedule new appointments.

Application Integration: The BlackBerry 5810 features exceptional hardware and software integration making it very easy to use. A single integrated address book and inbox serve all email, voice and SMS applications. And you can even click on an email address, telephone number or URL inside a message to automatically invoke an email message, call the telephone number or connect to the URL.

J2ME: Java 2 Micro Edition (J2ME) is a powerful development platform that is optimized for wireless devices and provides an industry standard programming environment for custom and commercial development. RIM plans to launch its Java Development Environment for developers at JavaOne later this month.

GSM/GPRS: General Packet Radio Service (GPRS) is a global wireless standard that uses existing GSM (Global System for Mobile telecommunications) radio base stations and converts wireless data into standard Internet packets, enabling interoperability between the Internet and the GSM/GPRS network. GPRS efficiently enables BlackBerry handhelds to be always online without having to pay by the minute.

AT&T Wireless and VoiceStream are now accepting orders for the BlackBerry 5810 in the United States and are expected to begin shipping within 30 days.

Hardware and airtime pricing are determined by the carriers and will vary based on specific service plans.