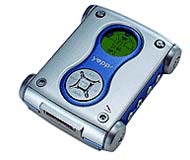 Samsung Electronics Co. Ltd. unveiled at the CeBIT trade show this week an upgraded version of its Photo Yepp digital music player that sports built-in memory and a better display than the original. Like the original, the new player can also display still images while music or other audio is played.

The Photo Yepp II comes with 64M bytes of built-in memory and a Smart Media memory card slot, meaning up to 192M bytes of memory is available when the current maximum capacity Smart Media card is used. This is enough for around three hours of digital music when encoded using MP3.

The screen has been changed from a 2.0 inch color reflective LCD (liquid crystal display) to a 1.8 inch color TFT (thin film transistor) LCD. The latter makes use of a backlight which means a much brighter display at the expense of some battery life. Like the original, the Yepp II has a rechargeable Lithium Ion battery which, according to Samsung, provides 7 hours of life with the LCD turned on and 11 hours with the LCD turned off.

Support for digital music formats has also been expanded with Samsung adding Windows Media (WMA) support to the Yepp which originally supported the MP3 format only.

In addition to a redesign, the other significant change is the removal of the docking station. The device connects directly to a personal computer via USB (Universal Serial Bus).

Samsung plans to begin shipping the Photo Yepp II to North America shortly and expects it to hit shelves sometime in May priced at around US$449. Sales in Europe and South Korea will also start at around the same time. It is targeting first year sales in North America at 10,000 units.