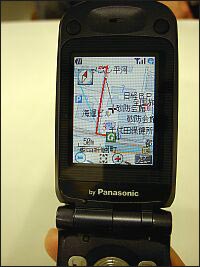 Named “C3003P,” and produced by Matsushita Communication Industrial Co., Ltd., it will be released some time in mid-March. The KDDI Group will provide the mobile phone service under the brand name of “au.”

Users can find their position by using a geomagnetic sensor installed in the handset, which is capable of analyzing the direction the device is facing. The KDDI Group will realize the navigation function for walkers by combining the electronic compass with the global positioning system (GPS)-based location information function called “eznavigation.”

The electronic function is available in “NAVITIME,” which is one of the contents for the “eznavigation.” When a user is moving, the map on the screen turns around automatically to continue displaying on the upper side of the screen the direction toward which the user is moving. The users can reach the destination by following the course displayed on the mobile phone’s screen.

The map can be scrolled in eight directions, including upward, downward, right and left and four oblique directions. It is also possible to display a map data by enlarging or reducing its size into two or three different levels.

The KDDI Group has developed applications for displaying the map on the screen by using Binary Runtime Environment for Wireless (BREW), which is an application development platform for mobile phones proposed by U.S.-based Qualcomm Inc. Unlike Java, BREW allows the direct access to the chipset of the handset, and for this reason, it enables the development of high-speed and high-performance applications.

Nikkei Communications actually tried the C3003P mobile phone now under development. Its function to revolve the map, and enlarge and reduce its size, worked smoothly, and was good enough for commercial use. Usually, BREW applications are equipped with a system that allows users to download data through the Internet. However, those preinstalled in the C3003P mobile phone do not have the downloading function.