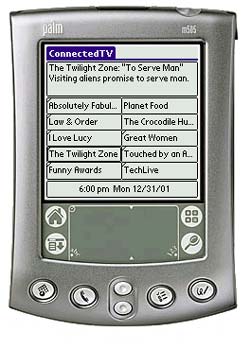 ConnectedMedia Corporation today announced ConnectedTV (TM), a new consumer service and companion software application that lets TV viewers see lists of TV shows on a Palm (TM) organizer screen and tune a show simply by tapping its name. The service will be available for a $30 per year subscription fee, or $99 for a lifetime subscription. ConnectedMedia is demonstrating ConnectedTV in public for the first time at the 2002 International Consumer Electronics Show at booth #24345 in the Las Vegas Convention Center, January 8-11th.

“ConnectedTV is the first PDA software to address consumers’ needs where they spend hours each day – at the TV,” says ConnectedMedia founder and President David Levitt. Millions of handheld computers, known as Personal Digital Assistants or PDAs, are used mainly for information management applications like address books and calendars.

“With cable and satellite TV, there are just too many choices for a magazine or a TV screen guide to be convenient,” says Levitt. “Viewers become servants to their TVs – forced to learn a pile of remote controls, enter multi-digit channel numbers, wait for a scrolling channel guide, or page and step repeatedly in an interactive guide. But waiting and working are the last things viewers want to do when they flop down in front of a TV. ConnectedTV makes finding TV shows much faster, simpler, and more fun.”

Fred Davis, founder of Consumertronics Media and the new DiG iT magaZINE, hails the announcement saying, “ConnectedTV represents a major revolution in both TV technology and in consumer simplicity and convenience. This is the first remote control that is truly universal, and both its interface and functionality blow even the more expensive competition out of the water. I can now rid myself of the cluttered clusters of remote controls swarming around the several TVs I own.”

ConnectedTV’s innovative solution offers instant access to shows for a fraction of the cost of cable, satellite, TV guide magazines, or recorders like TiVo. Users see show names and descriptions for just the stations they want, review them at their own pace on a screen designed for reading text, and simply tap on the name of a show to tune it – without interrupting or shrinking their TV image, or even knowing what channel a show is on.

Show names appear on finger-sized buttons on the PDA screen, so no stylus is needed. TV controls like Mute and Volume are available on the PDA’s built-in hardware buttons, so users can quickly adjust the TV without even looking at the device. “We made sure viewers can operate this easily with one hand,” says Don Hopkins, who helped create Maxis/Electronic Arts’ hit game The Sims™ and is one of the software industry’s most respected software engineers and GUI designers.

ConnectedTV show listings are updated automatically when the user synchronizes or backs up the PDA to a personal computer or other networked device. The system provides TV control by adapting the built-in wireless infrared “beaming” capability of devices that run Palm Computing’s Palm OS (TM) operating system. Previous applications have used this capability to turn the Palm into a remote control by creating digit buttons on the screen, but these solutions were no faster or easier to use than a remote control.

ConnectedTV works whether a viewer has cable, broadcast, or satellite TV service. Users of popular Palm OS handheld organizers can run ConnectedTV without buying any new hardware. ConnectedTV software runs on PalmOS PDAs from the $99 Palm m100 to the high-end Palm m500 series, including the Palm IIIc, Palm V, and Handspring Visor models. 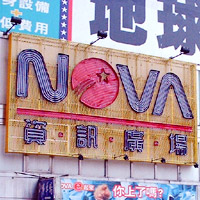 A Guide to Shopping for Electronics in Taipei