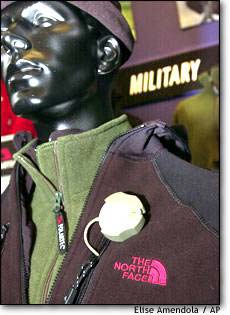 The Jackets Jettison the electric blanket model — traditional wires running through cloth to produce heat. Instead, they conduct heat through stainless steel microfibers thinner than a human hair. The fibers are as washable, bendable and soft as the fabric into which they’re woven.

Malden Mills of Lawrence, which makes Polartec fleeces, has licensed the technology to The North Face, which is using it for the high-end MET5 jacket, and to Land’s End for a blanket.

Down the road, fibers could relay not only heat but also data, turning clothing into truly wearable computers — something scientists have experimented with for years but haven’t perfected for widespread use.

Someday, the technology could even turn strangely back on itself: air-conditioned textiles to keep the users cool.

Malden Mills is banking on heating technology to help pull it out of financial difficulties. Six years after a devastating fire, it filed for voluntary bankruptcy protection in December.

“Part of our DNA here is, you innovate or you die, especially in this industry in the U.S.,” spokesman David Costello said.