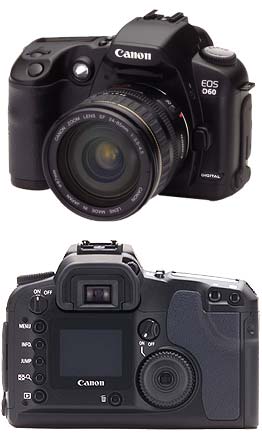 Canon is proud to announce the EOS D60 featuring a 6.3 megapixel ultra-fine CMOS sensor. The EOS D60 builds on the acclaimed Canon EOS D30 model increasing resolution by a staggering 100% and adding a number of high-end professional level features.

Even though image resolution and file size has increased radically, the camera still maintains the high-speed shooting of approximately 3 frames per second in a burst of 8 frames.

Additional professional features are now included. Images can even be saved in both lower resolution JPEG, for quick and easy review & transmission, and Canon’s RAW file format, for high quality archiving and image control.

On top of the improved resolution, a number of other features have been added aimed at improving performance of the camera.

For example, AF performance in low light environments has been improved along with enhanced metering algorithms. This combination delivers greater image quality in difficult shooting conditions. To capture that critical moment, the shutter release lag time has been dramatically reduced ensuring photographers can activate the camera almost instantly.

Other new features aim to further improve overall ease of use. The upgraded 1.8-inch LCD monitor located on the back of the camera offers improved brightness and provides a greater angle of visibility. The LCD permits the viewing of captured images, or information, such as the shutter speed, aperture value, exposure mode and histogram.

The EOS D60 is compatible with over 60 Canon EF lenses.

Image data is stored on CompactFlash™ cards, permitting the storage of up to approximately 92 images on a 128 MB card when shooting in the “Large/Normal” mode. The EOS D60 is compatible with CompactFlash Type I and II, enabling users to take advantage of the IBM Microdrive and other high-capacity storage media. The high-capacity Battery Pack BP-511, which is included with the unit, provides enough power to take up to approximately 620 shots. For extended shooting the optional Battery Grip BG-ED3, which accommodates two battery packs, can be used.