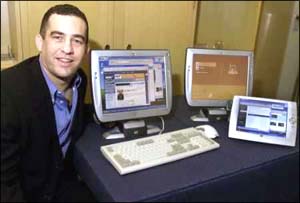 “We’re seeing some strong momentum in the Japanese marketplace,” said Keith While, a senior marketing director at Microsoft’s embedded and appliance platforms group.

Mira, instead of working like a laptop or tablet PC, uses a wireless network standard called 802.11 to let users detach their monitor and use a stylus pen to access the Internet, e-mail and digital content via their desktop PCs.

Unveiled last month by Chairman Bill Gates, Mira is a set of technologies built around Microsoft’s latest portable operating system that will be embedded into hardware.

As hardware devices become more intelligent, major hardware and software makers are trying to find ways to place their products at the center of the post-PC digital home.

“We expect to announce more companies in the future,” White said in an interview.