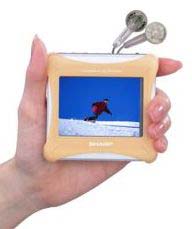 Sharp Corp. is expected to launch on Feb. 23 the “MT-VA1,” a portable AV player designed to record and reproduce video and music data.

The player has been developed in the hopes that it would spur viewing of dramas and movies as well as music clips during time spent commuting to work and school, lunch breaks, and time spent waiting for someone.

The product’s principal targets are women in their late teens through their late 20s. According to Sharp’s survey of women in that generation, quite a few women said that they are interested in sharing and enjoying favorite programs with friends.

Video data are stored either in the built-in 64MB synchronous DRAM (available capacity is 56MB) or in the SD Memory Card. When an SD Memory Card of 128MB is used, the recording time in each mode (S-Fine, Fine, and Normal) is about 33 minutes, 66 minutes, and 120 minutes, respectively. Sharp adopted the Nancy Codec for the recording card of the Sharp’s PDA Zaurus MI-E21, however, “It was difficult to realize the S-Fine Mode with the Nancy Codec,” said Sharp.

Voice data are compressed in the MP3 format. When the player is used as a voice player, the compression speed is 96kbps or 40kbps. When used as a music player in the “normal mode,” it is 128kbps, while it is 96kbps in the “economy mode.” Recording time of SD Memory Card in the normal and economy mode is about 124 minutes and 164 minutes, respectively.

Further, the player also reproduces in the G.726 format. Both video recording and voice recording are performed through composite signals using the attached AV stand. Recorded videos can be reproduced on personal computers, but music cannot be reproduced.

The player comes with a built-in three-inch color TFT liquid crystal panel with the backlight. Users can perform content selection on the menu screen displayed on the panel. In addition to the content list, the panel also displays content data capacity, time, available memory time, and sound volume.

The built-in lithium ion secondary batteries are designed to withstand about one hour of video reproduction and about 3.5 hours of music reproduction. Power consumption is 1.8W. The player measures 88mm x 82.5mm x 18mm, and weighs 126g.