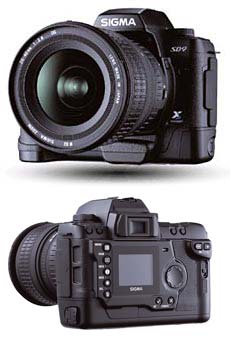 This high-definition digital SLR camera has is powered by FOVEON® X3TM image sensor, which can capture all RGB colors at each and every pixel. SIGMA SD9 will be introduced at booth No.1635 at PMA 2002 in Orlando, Florida, USA Feb 24-27, 2002.

The breakthrough Sigma SD9 camera with FOVEON® X3TM image sensor is the world’s first image-sensor that features three layers of photo detectors. The layers are embedded in silicon to take advantage of the fact that red, green and blue light penetrate silicon to different depths allowing full-color to be measured at every pixel. The layers are positioned to take advantage of the fact that silicon absorbs different colors of light at different depths, so one layer records red, another layer records green and the other layer records blue, This means that for every pixel on a FOVEON® X3TM image sensor, there’s actually a stack of three photo detectors, forming the first and only full-color capture system.

SIGMA SD9 powered by FOVEON® X3TM image sensors capture red, green and blue light at each and every pixel. All other image sensors feature just one layer of photo detectors, with just one photo detector per pixel. To capture color, pixels are organized in a grid, or mosaic, resembling a three-color checkerboard. Each pixel captures just one color-red, green or blue. The filters let only one wavelength of light (red, green or blue) pass through to any given pixel, allowing it to record only one color. As a result, mosaic sensors capture only 25% of the red and blue light, and just 50% of the green.

That approach has inherent drawbacks, no matter how many pixels a mosaic-based image sensor might contain. Since they only rapture one third of the color, mosaic-based image sensors must rely on complex processing to interpolate the two-thirds they miss. Interpolation leads to color artifacts and a loss of image detail. In fact, some digital cameras intentionally blur pictures to reduce color artifacts.

With the RAW data recording system of the SIGMA SD9. It is possible to obtain high picture definition and compact file size. Losses compression system of RAW data, eliminates image deterioration, provides superior pictures without sacrificing original image quality, RAW data is convertible into high TIFF and JPEG formats by dedicated image processing software “SIGMA Photo Pro”. According to the requirements of the photographer, it is also possible to change the characteristics of the image, such as white balance, brightness, contrast etc. when they are converted into TIFF and JPEG formats. Even if the photographer makes some additional adjustments to the image, the quality of the image will not deteriorate, if the photographer makes the adjustments based on the saved RAW data.

The coverage of a viewfinder of a digital SLR camera with interchangeable lens is almost the same as the picture seen on its image sensor,

However, the coverage of viewfinder can be maximum 100% and no portions of the outside area reflected on the image sensor can be seen. SIGMA SD9 is equipped with a “sport finder” for easily following the situation outside the picture area,

The range that is out of the image sensor coverage range is marked by transparent light gray, to distinguish it from the active picture taking area.

It is also important to control the surrounding situation of the photographic subject. In this respect. the sports finder will be ready to provide a good opportunity to take a good picture anytime. When talking a picture of a fixed object or close-up photography, composition can be easily determined because the outside of the range of the picture can be seen.

Easy To Use Interface

Each button of the Sigma SD9 is devised and arranged to provide a functional and easy-to-use setting,

By means of the 4-Way Controller on the back of the body, menu settings and camera settings can be adjusted very quickly.

By using the Zoom-in View mode, the details of the image can be magnified by moving the cursor and choosing the location with the 4-Way Controller.

The command dial can quickly select the resolution settings, and the ISO sensitivity setting. It i.5 also possible to make program shift in the Program AE Mode.

The SIGMA SD9 is equipped with a large 1.8′ 130,000 dot low temperature polysilicon TFT-LCD monitor with white LED on the back panel, which displays images, menus and histogram, The coverage area of the LCD monitor is 100%, and it will have similar coverage to that seen from the viewfinder and thanks to the LCD-monitor, the composition can also be seen easily.

By operation Of 4-Way Controller, three types of screen display can be chosen; thumbnail display (9 segments simultaneous display), Single-image display, and a Zoom-in display (the area to magnify can be freely chosen by the 4-Way Controller).

The SIGMA SD9 can transmit the images from camera to computer with high-speed IEEE1394 (S400) and widely available USB interfaces,

SIGMA SD9 employs CF card as Image Storage Media. Since the SIGMA SD9 is compatible with the Compact Flash Type II card, use of IBM Microdrive is also possible.

The outstanding storage capacity of IBM Microdrive TM enables photographers to use the camera even more effectively.

Since this power pack SD can be equipped with four CR-V3 batteries extensive photography can be attained,

SIGMA SD9 camera’s video output system can be switched between PAL system (used in Europe, etc..) and NTSC system (in Japan and the U.S., etc.) This means that video output of the SIGMA SD9 Picture is possible anywhere in the world.