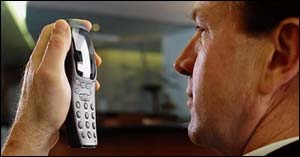 In its drive to commercialize a miniature display that can meet the demanding mix of high performance and low cost, Microvision, Inc. today announced it has demonstrated a fully-functional miniature display that uses just three light emitting diodes (LEDs) coupled with a vibrating mirror on a tiny micromechanical chip.

As the user holds a cell-phone-like device near one eye, the tiny display scans a single beam of multi-colored light through a small lens to project a full-color video image of the apparent size and resolution of a notebook or laptop display screen onto the eye. This prototype display represents a major milestone for the company, which believes its unique display can add functionality to such emerging consumer products as handheld wireless devices to gaming systems, portable DVD players and digital cameras.

According to Russell Hannigan, Microvision’s director of business development for advanced products, the unique display platform — with its combination of high-resolution and bright vivid colors — could well become the industry standard for personal displays.

“The annual production volumes for these types of consumer products can reach into the hundreds of millions of units very quickly,” said Hannigan. “We believe the market for miniature displays will grow to tens of millions of units over the next several years, but consumers will want inexpensive devices like mobile handsets and digital cameras to produce high quality images.”

The image quality of the Microvision prototype is exceptional, said Hannigan. “We achieve full Super VGA (SVGA or 800 X 600 lines) resolution and have measured contrast ratios up to 150:1. Color gamut and saturation are already comparable with a very high quality CRT and we expect to see further improvements in performance over the weeks ahead.”

SVGA resolution is an important baseline, said Hannigan, because so much content on the Internet and elsewhere already exists in this format. With a display of a lower resolution, the user must either reformat the content or do a lot of scrolling to look at parts of the image at a time.

Low cost is the other technological advantage represented by the prototype. “We can deliver higher image quality at lower prices than competing miniaturized flat panel displays,” said Hannigan. “Hitting an acceptable price point is going to be key to gaining and keeping share in the cost sensitive consumer electronics space. Ultimately it’s all about pixels per penny.”

Dr Aris Silzars, president of the Society for Information Displays said, “This achievement shows the power of Microvision’s unique MEMS scanning display technology. I’m very impressed with the image quality. The technology offers the emissive and unpixelated qualities that have allowed CRTs to dominate desktop and television markets, while offering the potential of very low costs in a sub-miniature package. I can’t wait to get a 3G cell phone with a Microvision display inside.”

Microvision’s current demonstrator is a key step in developing a display platform suitable for consumer applications. The company will spend the next 18 to 24 months reducing the size, weight, power consumption and, especially, cost of the unique miniature display. The company is working with partners like Taipei’s Walsin Lihwa Corp. to develop techniques to mass-produce the MEMS scanner, and Cree, which produced the LED technology for the device.

“Partnering is a key part of our strategy for bringing this technology to market,” added Hannigan. “We have some very strong technology partners, and we are seeing growing interest from major players in the wireless world and in consumer electronics for a variety of applications — an interest that I expect will build even faster once we show our latest achievement.”